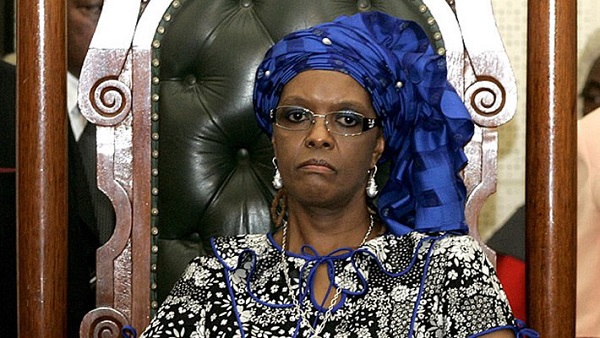 HARARE – Highly-placed sources have revealed that First Lady Grace Mugabe is now permanently in a panic-mood given the critical health concerns associated with old age afflicting her husband who almost fell head wards as he embarked from his car at the just ended Harare Agriculture Show.

The sources said the First Lady‘s fears were heightened recently when President Mugabe appeared lifeless in his sleep. Attempts by the First Lady to wake her husband were futile as he remained motionless.

“The First Lady confided in some of her closest relatives that it has now become a norm for her husband to enter into lifeless mood only to suddenly wake up like a ghost and goes to the toilet,” said the source.

Grace Mugabe is reportedly scared that one day her husband may “sleep forever” and has frantically called for some doctors to be stationed at the Borrowdale House 24/7 to monitor the President’s health. As the only person closest to President Mugabe, the First Lady understands the critical nature of his health and this explains her recent overdrive campaign in first elbowing out former Vice President Joice Mujuru out of the ruling ZANU PF and now has embarked on an anti-Mnangagwa campaign.

Emerson Mnangagwa is one of the two Vice Presidents of Zimbabwe together with Phelekezela Mphoko. Mnangagwa is widely viewed as the automatic heir apparent of the octogenarian Mugabe but is facing stiff resistance from a faction going by the moniker of G40 fronted by the First Lady.

Other members of the G40 faction are Higher Education Minister Jonathan Moyo, ZANU PF commissar and Local Government Minister Saviour Kasukuwere and Mugabe’s nephew Patrick Zhuwao. Grace Mugabe revealed her fears at a recent Women’s League meeting held at her Children’s Home in Mazowe where he pushed for the ouster of Mnangagwa at the ZANU PF Annual People’s Congress to be held in Masvingo in December.

“Their plan is simple. They want to build momentum towards the conference by discrediting Mnangagwa and his cohorts. They also want to push for the conference to be an extraordinary congress where there will be serious purging of Mnangangwa and his allies,” said the source.

It is also alleged that the First Lady will soon be embarking on countrywide rallies which will be dabbled “Meet the People” tours where Mnangagwa is expected to be the main subject of focus. However, it remains to be seen how Grace and her allies will execute their plan given that Mnangagwa is backed by the military establishment led by Commander Defence Forces General Constantino Chiwenga.

“People like Chiwenga are well aware of Grace’s machinations and they squarely blame her for all the problems in the party. She is viewed as the most single destabilizing element in the party and they have tried to warn President Mugabe during briefings that the First Lady must desist from issuing negative remarks against the military.”

Either directly or indirectly, the security establishment has told Mugabe that it is a non-starter to try and push her wife into the presidium as this was tantamount to desecrating on the liberation ethos. Grace is however adamant and want to ensure that all potential aspirants to the throne are out of the way before her husband succumbs to ill health.

HARARE - Highly-placed sources have revealed that First Lady Grace Mugabe is now permanently in a panic-mood given the critical health concerns associated with old age afflicting her husband who almost fell head wards as he embarked from his car at the jus...
Share via
x
More Information