ZIMBABWE – First Lady Grace Mugabe has been accused of fuelling most intra and inter-party human rights violations, recorded in the country, particularly during her rallies last month, where the ruling party contributed about 93% of violence cases tabulated by the Zimbabwe Peace Project (ZPP).

The ZPP’s November human rights violations report, titled Fear as a tool of political manipulation said most clashes were recorded at Grace’s rallies, where she donated foodstuff, clothes and agricultural inputs.

“. . . people attended First Lady Grace Mugabe rallies, where she brought substantial tonnage of food stuffs and inputs, among other ‘give-aways’ and hoped to get a share of these goodies. Many of them found that they had to contend with jostling and shoving in long queues, as well as facing heavy-handed police control, which often gave way to police brutality, as the police attempted to maintain order during the stampedes for the handouts,” part of the report read.

According to the report, cases of violence involving Zanu PF jumped from 79% to 93% of the total violations recorded throughout the country.

In most instances, the report said, rival Zanu PF camps clashed before and after Grace’s campaign rallies.

Zanu PF’s restructuring meetings were also said to be a source of violence, often resulting in the abandonment of some of the exercises, as tension mounted mainly ahead of the party’s national conference held in Victoria Falls early this month.

The alleged clashes were between rival camps supporting Vice-President Emmerson Mnangagwa and Grace, the report said.

“. . . MDC-T came a far second with 0,05%. Such a trend shows without a doubt that Zanu PF is the dominating culprit when it comes to violence,” the report reads.

The Zanu PF factional violence has also been blamed for the murder of the party’s two Chitungwiza supporters by fellow party member, Proud Mupandwa, on November 14 this year.

“How can giving people food be referred to as a form of violence?” he asked.

“Zanu PF is a peaceful party and that is why it is gaining foothold, even in the previously MDC-T-dominated areas like Bulawayo.”

According to the report, victims of Zanu PF intra-party fighting made 24,2% of total incidences, while the remaining 39% were politically-motivated violence targeting people whose political background could not be ascertained.

Mashonaland Central recorded the highest incidences of Zanu PF intra-party clashes, followed by Harare, Mashonaland West and Manicaland, while Matabeleland provinces had no incidences of violence.

Intimidation and harassment, at 102 out of 208, was the most common form of violation followed by discrimination with 47 cases.

Twenty-one assault cases were recorded, 13 cases of theft and looting, while 12 instances of malicious damage to property were also recorded.

Most perpetrators were men aged between 30 and 49, while victims were in the 30 to 59 age group, according to the report. 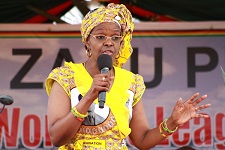 ZIMBABWE - First Lady Grace Mugabe has been accused of fuelling most intra and inter-party human rights violations, recorded in the country, particularly during her rallies last month, where the ruling party contributed about 93% of violence cases tabulate...
Share via
x
More Information
x