ZIMBABWE – President Robert Mugabe’s increasingly influential wife — Grace — touted in some circles within the strife-torn Zanu PF as a potential future president, is revelling in borrowed robes, and her fortunes could plunge once her husband departs the political scene, a leading academic and political analyst has warned.

Former advisor to opposition leader Morgan Tsvangirai and law lecturer at the University of Kent in the UK, Alex Magaisa, told the Daily News in an exclusive interview that the First Lady’s chances for the leadership of Zanu PF and the country depended on Mugabe actively supporting her bid.

“Before last year, if you had asked the same question, only a few people would have given it any serious thought. Now, however, after her controversial and rather noisy entrance into the political arena, it would be foolhardy to discount her.

“However, her chances depend on her husband leaving power voluntarily and supporting her bid before his demise. If they wait until after his demise, then she will have absolutely no chance because her political weight, which makes her look like a heavyweight, is borrowed from her husband and when he’s gone, he will take it away with him and she will drop down to the featherweight division,” Magaisa said.

“Right now she is revelling in her borrowed robes but the lender is her husband who, when he eventually goes, will take them to the grave. She has chosen to play an influential role in determining the post-Mugabe arrangement for self-preservation and protection.

“She is only 50 and the children are young. But her new role is a big gamble. It could either pay off very handsomely if she gets her way, or blow up in her face very unpleasantly, if her horse loses the race.”

Grace has emerged as a surprise challenger to Vice President Emmerson Mnangagwa who is widely seen as the front runner to succeed Mugabe.

A shadowy but ambitious group, consisting mainly of relatively young Zanu PF politicians, going by the moniker Generation 40 (G40), is also seen plotting behind the scenes to expediently hoist Mugabe’s wife, as a way of blocking Mnangagwa, long-considered to be the nonagenarian’s first choice for the top job.

The G40 is said to include Zanu PF political commissar Saviour Kasukuwere, who denies harbouring any lofty political ambitions, even as Mnangagwa’s supporters view him with serious suspicion in the light of the growing political attacks on Mugabe’s deputy.

Magaisa said while Grace is commanding power and influence, he was not sure if this could see her succeeding her husband, since a lot depended on the frail Zimbabwean leader, whose advanced age and public gaffes are increasingly becoming worrisome.

“Is she an important player right now? Yes, but only because President Mugabe is still around and commands respect and obedience from Zanu PF people. Grace Mugabe’s power is like a loan which is guaranteed by a wealthy partner.

“It is valuable to the lender only to the extent that the guarantor is available and wealthy enough to indemnify any losses. But once the guarantor or his wealth are gone, it could all turn stale very quickly and would have to be written off,” Magaisa told the Daily News.

“The faction backing her is united by the members’ collective desire to stop Mnangagwa, just as they were determined to stop Mujuru. They also saw how useful Grace Mugabe was in toppling Mujuru. The strategy of that faction, in my view, which I am told is referred to as Generation 40, is to get rid of the old guard in a post-Mugabe era.

“They already achieved part of that plan with the removal of Mujuru, Mutasa, Gumbo, etc. This is the group of the old guard whose roots and source of power are in liberation war politics. Mnangagwa and his group would also be in that generation hence the resistance.

“I suspect this group fancies its chances with Grace Mugabe backing them. She could either be their preferred candidate or she would be a useful ally for their own candidate. It’s a battle of generations in Zanu PF,” said Magaisa. 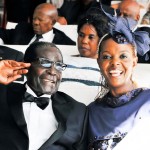 'Grace is nothing without Mugabe'

ZIMBABWE - President Robert Mugabe’s increasingly influential wife — Grace — touted in some circles within the strife-torn Zanu PF as a potential future president, is revelling in borrowed robes, and her fortunes could plunge once her husband departs...
Share via
x
More Information
x