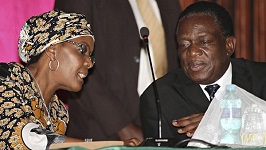 The two officials are part of the Zanu PF group which backs Mnangagwa to succeed the 91-year-old and reportedly ailing President Robert Mugabe.

Those subjected to no-confidence votes at Tuesday’s meeting which Grace chaired include national secretary for administration, Esphinah Nhari.

Her crime: chanting an anti-G-40 slogan at Grace’s recent rally in Masvingo.

When addressing the gathering, Nhari stunned the top table which included Grace by declaring Pasi neG-40 (Damn G-40)! for which she was told off by vice president Phelekezela Mphoko.

G-40 is the name given to the Zanu PF faction behind Grace’s country-wide rallies and her suspected push to take over from her husband, President Mugabe.

The group is determined to ensure Mnangagwa does not succeed the veteran leader.

Also axed Tuesday was Monica Mutsvangwa for alleged insubordination to the First Lady.

Monica is wife to war veterans minister Chris Mutsvangwa, a top Mnangagwa ally and most vocal public critic of the G40 faction.

Monica’s husband also appears to be on borrowed time after national political commissar and G-40 leading light Saviour Kasukuwere declared at the weekend; â€œEnough is enough of this Mutsvangwa nonsense!

The ouster of Monica and Nhari was confirmed by Women’s League deputy secretary Eunice Sandi Moyo.

Fired over a slogan

The women themselves said the slogan that she chanted was not proper because it pushed factionalism, said Moyo.

The issue is not about the First Lady, but about her (Cde Nhari) putting the name of the Women’s League into disrepute by chanting a slogan about G-40 which is divisive and meant to divide the party.

The women said as a senior party cadre, she was not supposed to say that.

Mutsvangwa was sanctioned for â€œindiscipline and disrespecting party procedure.

The problem with her (Monica) case has to do with indiscipline where she did not want to follow the procedures of the party, Moyo explained.

The League wanted to cleanse itself of indisciplined cadres. We donâ€™t expel because we are a wing of the party.

We recommend the views of the women that have been made unanimously and overwhelmingly.

The sanctions come ahead of the ruling party’s national conference which will be held in the resort town of Victoria Falls at the weekend.

The decision to fire Nhari and Mutsvangwa will be forwarded to the Zanu PF national disciplinary committee.

But their prospects there are not encouraging, considering the committee comprises Grace and top allies Mphoko, Kasukuwere and national youth chairman Pupurai Togarepi.

Party sources said other top Mnangagwa allies targeted for the sack include his wife Auxilia, Oppah Muchinguri and Mabel Chinomona.

Zimbabweans Should Know And Assert Their Rights: Mavhinga

Who will make up Mugabe cabinet?

I will step down if I lose — Mugabe