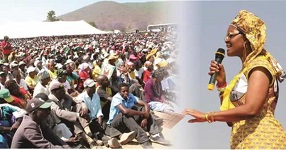 Zinasu Chinhoyi University of Technology (CUT) leader Joana Mamombe said Grace’s allies had sponsored the rival Zimbabwe Congress of Students’ Union (Zicosu) and provided T-shirts emblazoned with the First Lady’s face in order to intimidate students ahead of the elections.

“We are seeing that our main opponents Zicosu have roped in Grace Mugabe who provided them with 1 500 T-shirts. To us, it’s a form of intimidation,” Mamombe said.

Mamombe, who is vying for the SRC presidency, said they had since petitioned the institution’s “partisan security” and the administration, demanding that Zicosu members should stop wearing Grace’s T-shirts.

But Zicosu’s “sponsored” presidential candidate Watson Mabasa defended the wearing of Grace’s T-shirts, saying the students’ body had the same ideology with her.

“These are our parents and nothing should stop us from wearing T-shirts with Amai Mugabe because our ideologies are the same,” Mabasa said.

The T-shirts have the message: “Gore rino tichadzidza zvakawanda”, accompanied by Grace Mugabe’s portrait, while at the back, the message reads “Gore rezvidzidzo-Unconquerable-Munhu wese kuna amai”.

Despite their differences, Zinasu and Zicosu were in agreement that the CUT administration had failed to create a conducive learning environment for students.

Both aspiring presidents said there were inadequate lecture rooms and students sometimes ended up studying under trees.
“Why they continue to enrol when there is no learning space defies logic,” Mabasa queried.

Mugwagwa told NewsDay yesterday that he was formerly with Zicosu, but left due to differences with others before deciding to stand as an independent candidate.

“I now fear to spend time at the campus because they are threatening me with violence. This is an open election and all that intimidation should stop,” he said.

Eight candidates are vying for the position of SRC president.