ZIMBABWE – It was a phenomenal mile-stone achieved, all at the expense of many lives laid down just so the oppressive practices of the previous systems, be it political or cultural, traditional or religious could be put to a complete halt for God’s sake if not for humanity’s, and so we witnessed the promulgation of progressive legislation that paved a way for all to live freely.

While much has been achieved there is still work to do, especially with regards to gender equality.

It is thus disappointing to hear statements like those of Grace Mugabe of Zimbabwe finding their way into the South African public.

“If you wear a miniskirt, it’s your fault if you are raped”
~ Grace Mugabe.

Mrs Mugabe’s statement that women wearing mini-skirts are to blame for rape assaults is not only a violation of human rights that many women and men have fought and died for, but an intolerable, regressive insult to women all around the world.

According to SADC, “A number of countries, including Angola, Mozambique, Namibia, South Africa and Tanzania, have on average more than 30% women’s representation in the upper and lower houses of parliament. In Lesotho, 58 % of local government positions are filled by women. A number of countries have legislated minimum quotas for women’s representation in parliaments.”

These statistics represent progressive steps towards the full emancipation of women – so how on Earth do we allow mind-polluting utterances such as Mrs Mugabe’s, that seek to undermine the painstaking struggles of visionary men and women of this land, such a right of way to public platforms?

It is disheartening that at the time when energies are recollected to shift away from talking just numbers towards establishing substance into the gender equality agenda, progress retarding and aimless statements such as these break forth just to dent developments attained so far; God forbid.

It would have been disastrous if equipment such as the Oraglass Silhouette were not put in place to uproot mind-sets of Mrs Mugabe’s nature for good.

The Oraglass Silhouette, a new venture within the women empowerment space is an intervention in response to the findings of studies conducted by the founder, Oratiloe Tshehla and other researchers.

With women  reported to be still lagging behind on issues of development, the Oraglass Silhouette has taken a stance to enhance economies of scale by empowering women and bringing them on board for the propelling business case it presents.

Clearly, for South Africa and even the world to operate optimally in growing economies, it will take the maximum usage of the available human capital – both women and men.

With women only entering markets now, their empowerment remains key on the agenda. Thus, help-seeking regressive mentalities such as Mrs Mugabe’s should receive the Oraglass Silhouette first aid intervention as a matter of urgency for progress sake.

The picture below, is the Oraglass Silhouette public art work that aims among others, to ignite meaningful public engagement on issues pertinent to gender equality especially as a propelling business case and to educate those who do not know the African culture in terms of, from where comes the African woman and a miniskirt; those who have no clue that a miniskirt actually originate from the African roots.

Lebole as it was called in Sepedi; an ancient African miniskirt made from strips of animal skin and I am sure Zulus and other ethnic groups had their version of it. A miniskirt is therefore not at all a new thing to an African woman nor the African culture and it should not be taken out of context today by those whose minds needs to be born again and transformed for humanity sake.

Real Pedi men tells of how at that time back then, girls would dress up just in lebole, take their calabashes down the river to fetch water or to the bush to collect wood for fire and there would be no one boy to even think of looking lustfully at them because it was the norm, they would innocently appreciate the outlook beauty without attaching any strings and there were no such devastating rape cases seen today.

This makes a miniskirt part of an African woman’s being, it comes inherently within her because of that ancient African designer who had lebole put together and said, “it is good for an African girl”. Thus, a miniskirt cannot be turned today into a scapegoat to condone the barbaric acts of those whose minds require real circumcision.

Mrs Mugabe and everyone else who sees these things through her lenses need to re-learn these invaluable factors of the African culture to save themselves this embarrassment of identity chaos they find themselves in for it is purely not African to think in the way they do and the Oraglass Silhouette could not be such a perfect means of intervention for this call. 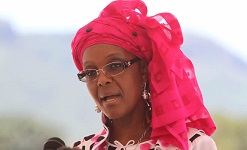 ZIMBABWE - It was a phenomenal mile-stone achieved, all at the expense of many lives laid down just so the oppressive practices of the previous systems, be it political or cultural, traditional or religious could be put to a complete halt for God’s sake ...
Share via
x
More Information
x