Grace not qualified to be President – Mutambara 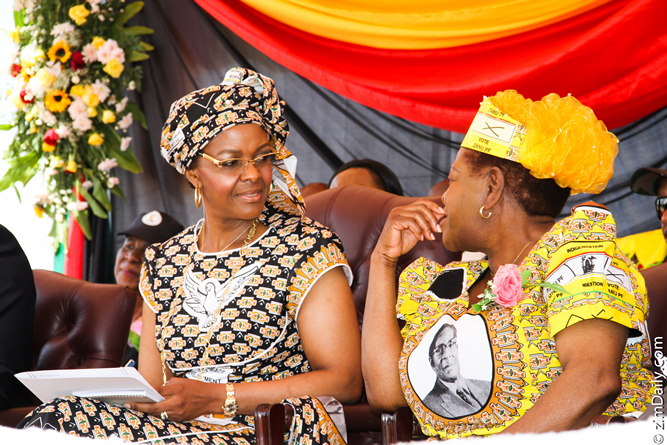 Mutambara was launching his new book at Dr Ibbo Mandaza’s Sapes Trust, its publishers, in Harare Wednesday evening but gave no hint about his own political future.

The former student leader and robotics professor also succeeded in bringing political rivals under one roof who were all eating out of his hands in an address that was full of humour and self-praise.

“So, I can do a seminar here and tell you whether they are able to be presidents. I took care of them and I have very good insights in terms of their abilities; I was in charge of them.”

G40, previously rooting for a Mugabe continuation as leader, now supposedly wants Sekeramayi as successor while the so-called Lacoste fronted by Mnangagwa wants the VP as successor.

In his address, Mutambara also turned to President Robert Mugabe’s wife who has also shown ambitions of succeeding her 93-year-old husband.

“Avo (referring to Grace’s still picture on the chart) we didn’t supervise them. It means they are not qualified to be presidents because if I couldn’t supervise you, you are not ready.

“Come on! Dr (Simba) Makoni, are they ready these people?” he said to laughter from a gallery that was full of politicians, members of the academia and civil society activists.

“Robert Mugabe is the most interesting person in the country. I didn’t say important; interesting.

“57 years of interesting insights and there is not even a pamphlet, not even a little book. So, if you are Lacoste, if you are G40. If you love President Mugabe, please allow him to do an autobiography so we can learn from his many experiences.

“Those are interesting stories but they are not happening because there is no writing culture in the country and because G40 insists he must run for elections next year. Shame on you!

“We need to see a book next year, not an election.”

Mutambara also spoke of how, in their childhood with close friend Munyaradzi Gwisai and others, they glorified President Mugabe’s push for a one-party state and how they later disparaged it when they discovered it had self-serving interests.

“We were very impressed with the liberation struggle as young zealots; me and Gwisai and others.

“And, of course as you know, we turned against the one-party state.”

Mutambara was accompanied by his wife, in-laws and some close family members.

Except for Chaibva and Mafume, all took turns to shower praises on the initiative.

The book, entitled. “In Search of the Elusive Zimbabwean Dream: An Autobiography of Thought Leadership Vol. 1”, traces back the 51-year-old professor’s humble beginnings as a village boy in rural Manicaland right up to his illustrious academic, professional and political life. NZ

Grace not qualified to be President – Mutambara