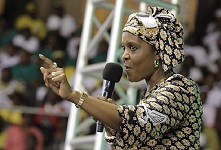 A senior provincial party member who declined to be named told NewsDay yesterday that they had received orders from fellow party members to sign a petition against Matiza.

“We have been receiving calls from some officials who are ordering us to pass a vote of no-confidence against Matiza. They are not coming out clean on the allegations levelled against Matiza, but they told us that it is Dr Amai (Grace Mugabe) who is instructing them to do so. We are now confused,” the source said.

But Matiza yesterday said he was in the dark about the alleged plot.

“I am not aware of such a plot. We are busy in the province. We are working hard for the betterment of the party. The whole new executive is working flat out to make sure all is well in the province, and here comes people abusing the name of the First Lady for their own ambitions. We will look into the issue and if the person who is plotting that is from within the province, then we will deal with that person accordingly. We are currently restructuring Mashonaland East province, meaning to say we are on the ground working hard,” Matiza said.

Chivamba, however, yesterday told NewsDay that his statement had been quoted out of context, saying he supported the First Lady.

“I said don’t leave us to her meetings because as chairman, people were coming to me saying why were other party members attending her rallies, leaving out others. People said they wanted to participate in Amai’s meetings and not to be left out,” Chivamba said in defending himself.

“She is our mother, the mother of the nation and as Midlands, we should be seen to be participating in her programmes and listen to get wise counsel.”

The latest purges against Mnangagwa loyalists come amid reports that the party’s acting Masvingo provincial chairperson Paradzayi Chakona was booted out last Friday for being sympathetic to the Vice-President.

Zanu PF Mashonaland Central youth leader Godfrey Tsenengamu was also stripped of his post recently on charges of supporting Mnangagwa, while Manicaland has been rocked by similar factional fights.

“In all the cases, the name of First Lady Grace Mugabe has been invoked,” a senior Zanu PF member who refused to be named said.

“The Mnangagwa faction is under fire. We will see a continued onslaught on his loyalists. Chakona was fired because he is a staunch Mnangagwa supporter. It is known in the whole of Masvingo.”

Grace is reportedly part of the G40, a group of Zanu PF Young Turks who are plotting to block Mnangagwa’s bid to succeed President Robert Mugabe.

Family Appeals For Help, After A Fire Destroyed Their House