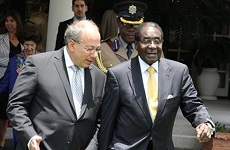 Kiki, who was accorded a State-assisted funeral, will be buried today at Pioneer Cemetery in Mbare, Harare.

Speaking at Kiki’s family home after the arrival of her body, Ambassador Contovounesios said there was a strong relationship between the two countries facilitated by Kiki.

“I can say that my country and Zimbabwe have lost someone very special who strengthened our relationship with her big heart. I can describe Kiki as a bridge between the two nations. She built friendships regardless of skin colour and different cultures,” he said.

Kiki’s younger son Mr Dimitrios Divaris (64) said he was overwhelmed with the love that Zimbabweans have shown.

“I am overwhelmed by the love the nation has shown my mother. I can’t explain to you how my heart is feeling. She loved everyone and the President of this country was like her father, in her life she represented the best of the people and brought people together,” he said.

Mr Sotirios Divaris (66), Kiki’s eldest son said he was ready to take over from where his mother left.

“After our father died, she was with me and my brother and I know her intimately like my brother does. She was the most wonderful woman and the most giving woman who had a heart to give, nothing else.

“That is her legacy and I think she deserves what is being done for her. I am ready to take from where she left,” he said.

The president of The Hellenic Ladies Association and friend to Kiki, Ms Despina Zoverdino said she had meaningful values that she tried to pass on to many people.

“Kiki taught me to be strong and stand tall, to continue no matter what. She guided me as President of Hellenic Ladies. I will remember Kiki as the most inspirational great and warm loving lady,” she said.

Kiki died at the age of 90. She was born in Greece and is survived by two sons, two grandchildren and two great grand children.

At the time of her death she was the patron of the Miss Zimbabwe Trust.

ZIMBABWE - Greece Ambassador to Zimbabwe Leonidas Contovounesios yesterday described Mrs Vassiliki ‘Kiki’ Babaletakis Divaris who passed away last Saturday, as a bridge between his country and Zimbabwe. Kiki, who was accorded a State-assisted funeral, ...
Share via
x
More Information
x