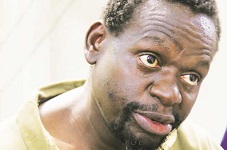 ZIMBABWE – The lawyer representing jailed RMG Independent End Time Message leader Robert Martin Gumbura yesterday said he no longer intends to make an application against the ill-treatment of his client in prison.

Mr Tapson Dzvetero, who had given the State notice to make such an application, yesterday indicated that the situation had been rectified.

“I no longer intend to make the application as my client has advised me that they are no longer being victimised.

“But if the situation changes between now and the next remand date, then I will proceed to make the application,” he said.

The presiding magistrate, Mr Francis Mapfumo, said all of Gumbura’s alleged eight accomplices would have to make their different applications on January 5.

The court came up with the decision after the prosecutor, Mr Michael Reza, argued that the applications would take up much of the trial’s time that is scheduled to continue on January 6 next year.

As a result, the applications had to be made on the day before the trial, January 5, to ensure that the trial commenced as planned the following day.

They are facing an additional charge of incitement to assault or alternatively conspiracy to assault.

It is alleged that Gumbura with the help of his eight accomplices orchestrated the riotous act at Chikurubi Maximum Security Prison early this year in which they attempted to escape from prison.

The court heard that property with an estimated value of $450 000 was vandalised.

It is the State’s case that the inmates attacked prison officers, seriously injuring three of them.

ZIMBABWE - The lawyer representing jailed RMG Independent End Time Message leader Robert Martin Gumbura yesterday said he no longer intends to make an application against the ill-treatment of his client in prison. Mr Tapson Dzvetero, who had given the Stat...
Share via
x
More Information