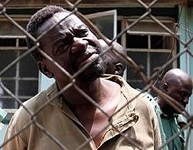 ZIMBABWE – The trial of jailed church leader Robert Martin Gumbura, who is facing charges of masterminding a foiled jailbreak at Chikurubi Maximum Security Prison, was yesterday deferred to today.

The magistrate, Mr Francis Mapfumo is expected to rule on whether to incarcerate the State witness Claudius Mutizwa or not when the case resumes.

On Tuesday, Gumbura’s lawyer Mr Tapson Dzvetero applied for the incarceration of Mutizwa whom he accused of wasting the court’s time by refusing to answer questions put to him by one of the accused, Blessing Chiduke, during cross-examination.

In most of the questions he was being asked, Mutizwa would say, “no comment”.

The prosecutor Mr Michael Reza opposed Mr Dzvetero’s application, arguing that the Act he cited only applied when a witness remained silent when a question was put to him/her.

The magistrate Mr Francis Mapfumo asked Mr Dzvetero to assist the court with a case law authority or legal position of the Act he cited, which he was provided with yesterday, prompting Mr Mapfumo to remand the matter to today for ruling.

He said he needed time to go through the case law.

While being cross-examined by Chiduke, Mutizwa would, even on a clear question which needed a yes or no answer, just say ‘no comment’.

Mr Dzvetero, who finished cross-examining Mutizwa on Monday, interjected and applied for his incarceration.

“Your Worship, the court should not tolerate this kind of behaviour from the witness,” he said. “The court should use its powers and reprimand the witness to answer questions and not to have a series of no comments.

“In terms of the Criminal Procedure and Evidence Act, the court has the power to send a witness who refuses to answer questions or give evidence in court to prison for eight days.”

On Monday, Mutizwa, who claimed to have been planted as an informant by the Zimbabwe Prisons and Correctional Services, refused to answer most of Mr Dzvetero’s questions.

Mr Mapfumo ruled that Mutizwa was not a security officer, hence should answer the questions.

ZIMBABWE - The trial of jailed church leader Robert Martin Gumbura, who is facing charges of masterminding a foiled jailbreak at Chikurubi Maximum Security Prison, was yesterday deferred to today. The magistrate, Mr Francis Mapfumo is expected to rule on w...
Share via
x
More Information