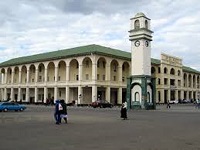 He said there were other under qualified personnel at the local authority who had no capacity to hold the offices and must be relieved of their duties.

Minister Kasukuwere said there should be no sacred cows.

“We understand that there was an audit report that came out following an audit conducted at the city council. The commission should follow that report and those that would be found at the wrong side of the law should pack their bags and go. Also those that are not fit to be in their offices should be dismissed. I have given you (the commission) the authority to look into the report and dismiss all those that are found on the wrong side of the law,” he said.

Minister Kasukuwere said the main thrust should be service delivery and not unnecessary expenditure by either council or management.

He said since the commission was put in place the situation in the City of Gweru had improved.

“We are aware that revenue has improved to $1.6 million a month. The commission has brought harmony to the city and also improved the service delivery. Service delivery should be given first priority,” he said.

Meanwhile Kombayi, who recently fled to the United Kingdom after acquiring British citizenship and took with him the mayoral regalia and council vehicle is now wanted by police for theft.

Minister Kasukuwere said Kombayi, who has vowed to return the regalia in 2018 when his term expires, has been reported to the police and is now being regarded as a fugitive.

“Kombayi is now wanted by police. We reported him to the police and they are now looking for him,” he said.

“I can confirm that we are looking for him and he is wanted by police,” she said.

Good reason for Mugabe to quit

I am unstoppable – Grace