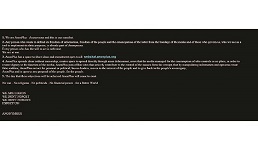 Speaker of the House of Assembly, Jacob Mudenda, yesterday confirmed the attack, which happened last week, saying investigations were underway to identify the culprits and their motives.

“We cannot divulge too much information at the moment as this is a matter under investigation,” he said.

The hackers left a screen grab message which read: “We are AnonPlus — Anonymous and this is our manifest.

“Any person who wants to defend its freedom of information, freedom of the people and the emancipation of the latter from the bondage of the media and of those who govern us, who we use as a tool to implement its dirty purposes, is already part of Anonymous.

“Every person who has the will to act is welcome. We are at war.

“AnonPlus spreads ideas without censorship, creates space to spread directly through mass defacement, news that the media managed for the consumption of who controls us no place, in order to restore dignity to the function of the media; AnonPlus puts offline sites that actively contribute to the control of the masses from the corrupt, that by manipulating information and opinions create false realities; AnonPlus [does] not act for personal or political, has no leaders, moves to the interest of the people and to give back to the people’s sovereignty;

“AnonPlus and is open to any proposal of the people, for the people.

“The day that these objectives will be achieved, AnonPlus will cease to exist.

“No war — no religions — no politicals — no financial power — for a better world,” the message read.

In 2013, the Ministry of Mines website, www.mines.gov.zw, was also hacked, and investigations into the matter proved fruitless.