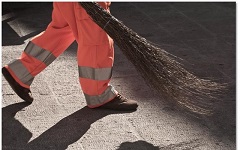 Arrests of litter bugs will now be intensified.

Minister Muchinguri-Kashiri said this on the sidelines of an anti-litter blitz which started along Samora Machel Avenue, Road Port and some parts of the Central Business District.

“What we are saying is that we cannot continue destroying our environment, either by throwing litter, which is in a form of plastic, also throwing away chemicals that are hazardous, that cause air and also water pollution.

“So what we are saying to Zimbabwe is that we need to join forces, today’s operation is a blitz, we campaigned, we warned our communities the people of Zimbabwe that we cannot tolerate litter anymore. Cleanliness is next to Godliness.

“So today it’s a combined operation, we are saying on this operation we are targeting motorists because they rank the highest of people who throw litter through the window, so we are saying they should keep our environment clean, starting from the cars themselves if they throw litter because they want a clean environment, they should start changing their attitudes,” said Minister Muchinguri-Kashiri.

She added that, “we started on this journey, a very rigorous campaign for anti-litter on the 23rd of December before Christmas.

“So we felt it was quite timeous indeed for us to launch it then. It’s a combined operation which involves the City councillors, the City fathers, also Rural District Councils, Local Government, also the police and my ministry,” she added.

On the road block along Samora Machel Avenue, City of Harare, Environmental Agency, the police officials were stopping cars.

Occupants were being told of anti-litter campaign. Motorists were also being given stickers and bins.

“This is serious business now (blitz on anti-litter) so we will be arresting even around ma properties evanhu, tikaona pane litter, it’s your responsibility to ensure that your environment is clean so we are also going for ma properties, we can continue (with our blitz), people must have responsibility, now hatina choice, we have to resort to arresting, we have done our best, we have persuaded, we have used every means to mobilise people to behave responsibly,” added the Minister.

Litter bugs will be fined US$20, as the Minister added that prosecution will be intensified.

Similar sentiments were echoed by the Director of Works Engineer Phillip Pfukwa, who said “it’s all about conscientising the public; we have seen that the City residents have this tendency to throw rubbish out of the car and sometimes very dangerous because you damage someone’s car, you damage the environment.

“Today the whole thing is to make that people put their litter in bins and we are giving them stickers just as reminders, this is just a comfortable, friendly reminder,” said Eng Pfukwa.

One disrespectful female driver had to be reprimanded after she attempted to drive off as Minister Muchinguri-Kashiri was addressing her.

“At leaast you should smile; you are a woman. We are telling you to stop so that we tell you what we are doing here yet you want to drive off,” said Minister Muchinguri-Kashiri.

“I’m the minister and we are telling you about this programme so at least you should show some respect and support this cause,” she said.