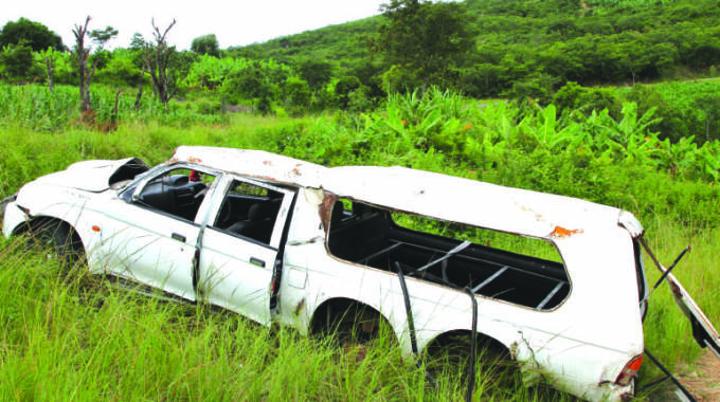 MANICALAND – The driver of a hearse transporting a corpse for burial in Checheche, Chipinge was killed when he lost control of the vehicle before it crashed. Stephan Gwatidzo, who was on his way from Shamva, was driving the hearse when it veered off the road along Ngundu-Tanganda Road near Nyautsa River in Middle Sabi around 3 AM on Sunday.

The driver of the hearse, Mr Stephan Gwatidzo of Harare, was driving a Toyota Hilux truck along the Ngundu-Tanganda Road carrying a corpse. He was heading to Checheche for the burial of the deceased.

Upon reaching the 245km peg, he lost control of the vehicle and it swerved to the right before overturning.

Mr Gwatidzo was thrown out of the vehicle, sustained head injuries and died on the spot. The body that was being transported did not sustain any injuries and was later taken to Chanda Village for burial.

We continue to urge motorists to exercise extra caution on the roads by adhering to road traffic rules.

Last month another hearse carrying a Honde Valley man, Caleb Mapaya, was involved in an accident that left his corpse defaced.

Mapaya’s coffin was thrown out of the hearse and broken into pieces, leaving the corpse laying on the ground.

His widow, Cecilia Chingaya-Mapaya who was seated next to the driver of the hearse, was thrown out of the vehicle and seriously injured and later passed away at Hauna District Hospital where she had been taken to.

MANICALAND - The driver of a hearse transporting a corpse for burial in Checheche, Chipinge was killed when he lost control of the vehicle before it crashed. Stephan Gwatidzo, who was on his way from Shamva, was driving the hearse when it veered off the ro...
Share via
x
More Information