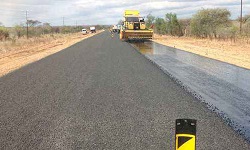 ZIMBABWE – The cost of dualising the Beitbridge-Masvingo-Harare-Chirundu highway has almost trebled to $2,4 billion as it will have facilities for overnight truckers and plazas, an executive with Infrastructure Development Bank of Zimbabwe (IDBZ) has said.

In 2003, the cost of dualising the 900km highway was pegged at $833 million and the latest figures have raised concerns from stakeholders who fear the project could have been overpriced.

But IDBZ executive director for infrastructure projects Desmond Matete said on Monday the amount tallied with the enormous work that would have to be done on the highway.

“The figure includes a lot of things. The amount of work to be done to produce a proper dualised road is too much. The road will have overnight facilities for truckers by the roadside and plazas among other facilities. The amount ($2,4 billion) represents the scale of work that will see us taking 5-10 years without touching that road again,” Matete told guests attending the Insurance Institute of Zimbabwe meeting in Victoria Falls.

He said Zimbabwe needed to spend $1,65 billion annually to keep abreast with its infrastructural requirements.

Matete said the financing options for the development of the country’s infrastructure were through debt, bank loans, bonds, equity, pension funds and internal funds by implementing agencies.

Other sources of finance include sovereign funds, securitisation of Diaspora remittances and public-private partnerships.
Matete said a $100 million investment on infrastructure had the capacity to generate up to 50 000 annualised direct and indirect jobs.

The highway has deteriorated over the years with observers slamming government for its delay in announcing the winning bid.
“We sat with the Minister of Transport and that of Finance about two weeks ago. Up to now I am still receiving calls and emails from bidders. But I am told the issue is now with the Cabinet,” Matete said.

The tender was, however, cancelled.

According to a 2012 World Bank report, Zimbabwe would require $33 billion to develop its infrastructure including transport, water, electricity and telecoms in the decade to 2022.

Women in jail misses her husband but doubt other side

Beyond RG Mugabe: An apocalypse

ZIMBABWE - The cost of dualising the Beitbridge-Masvingo-Harare-Chirundu highway has almost trebled to $2,4 billion as it will have facilities for overnight truckers and plazas, an executive with Infrastructure Development Bank of Zimbabwe (IDBZ) has said....
Share via
x
More Information
x