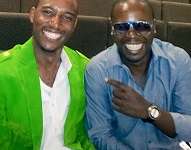 ZIMBABWE – There has never been a shortage of drama on the hip-hop scene the world over, with the beefing phenomenon always taking centre stage.

In the USA, these rap wars tend to get violent, with some of the artistes even getting shot in the process.

It seems like an explosive situation has also been brewing on the local hip-hop circuit, as most of the country’s top rappers seek to establish themselves at the helm of the genre.

In an industry that is characterised by big egos, rap artistes are always employing various tactics in order to boost their popularity levels.

With visibility being the key element in hip-hop, the artiste who commands more respect and has more street credit than the others is deemed to be on top of the game and this has led to a number of diss tracks being released as rappers seek to solidify their lyrical prowess.

Back in 2014, there was heated competition between MMT which comprised of Mariachi, MC Cut and Tate Da MC and Few Kings comprising of Tehn Diamond, Jnr Brown and Take Fizzo.

This sort of competition brought life to the rap scene and earned both camps massive attention.

However, when it fizzled out due to splits and other factors, the genre also lost momentum.

Last year’s beefing arena was dominated by Stunner and Mudiwa who were attacking each other both in song and on social media.

These two rappers have always been at each other’s throats on social media, especially in the fashion and style department. After Mudiwa was crowned the best dressed male at the Zim Hip-Hop Awards last year, Stunner took to social media, throwing shade at his nemesis by stating that organisers had given an award to someone who was dressed like a clown.

Stunner, who is well known for bragging and showing off has gone on to declare that he is the biggest artiste on the local rap scene.

Mudiwa later backed out and called for a cease fire. But it seems like last year’s hip-hop awards actually cultivated several beefs.

While Cal Vin was being handed his award for Best Male Artiste, one of the nominees, Briss Mbada charged at him on stage claiming that he was the rightful winner. Although Briss Mbada was thrown out of the event by security, he went on to put word on the street that he was still a better rapper with better street credit than Cal Vin.

Briss Mbada released a track that was directed at the Bulawayo rapper who went on to reply in a freestyle and this led to a mini battle that was dubbed Bulawayo versus Harare.

Ti Gonzi joined in and dropped a line that dissed Bulawayo rappers in a freestyle. Although this incident did not yield any significant lyrical exchanges, it was clear that emotions could draw nasty tribal battle lines.

Lately, however, with the battle for supremacy heating up, there have been allegations of physical confrontations and threats that could lead to an ugly situation if tempers do not cool down.

The most recent tussle for the throne is between Cal Vin, real name Calvin Nhliziyo and James Mpakula aka Jnr Brown.

For those who follow the local hip-hop culture closely, it cannot be disputed that these two talented rappers are among the best on the land.

Their beef started after last year’s Zim Hip-Hop Awards where Cal Vin walked away with three accolades. This did not go down well with Jnr Brown who highlighted that his song “Mariia” was bigger than any other rap song last year and deserved to win the Song of the Year Award.

However, their beef might have left the studio. Cal Vin is claiming that he was physically attacked by Jnr Brown and his crew during the Nama rehearsals at the 7 Arts Theatre in Avondale last weekend.

In a statement that he posted on his Twitter account, Cal Vin said, “Yes it’s true @jnrbrown263 slapped me during rehearsals yesterday. . . ”

Speaking to The Sunday Mail Leisure, Jnr Brown refuted the claims and said that on the day in question, he was actually in Mbare shooting a video with Soul Jah Love and other artistes.

“This guy is just trying to get attention and he is just using my name to get in the news. On the day he is saying I slapped him at 7 Arts, I spent the greater part of the day in Mbare shooting a music video and when I left I went for a radio interview at ZiFM so I don’t even know what he is talking about.

“Cal Vin is saying that I attacked him but if you listen to his song you will hear that he has actually threatened to crack my head open with a bottle of vodka and I think that he went a bit too far,” said Jnr Brown.

But the Luveve rapper still maintains that Jnr Brown slapped him.

“The fact of the matter is that Jnr Brown attacked me but in most media reports he is claiming that we never met when I was in Harare. I don’t really know what his problem with me is, anyway I will just concentrate on my music for now,” said Cal Vin.

Jnr Brown said he was not against lyrical battles as they encouraged artistes to step up their lyrical creativity.

Said Jnr Brown: “Exchanging lyrical shots is actually healthy which is why you see that sometimes rap battles have been organised in order to determine who is more lyrically gifted. The only problem comes when people become emotional and end up resorting to violence.”

He noted that his ongoing battle with Cal Vin is no longer healthy as it is now a hindrance to both their careers.

“We are now missing the bigger picture, which is the development of Zim hip-hop. For example, my latest song ‘Tongogara’ is one of the most talked about songs at the moment and I have already managed to sell thousands of units through various social platforms but right now people are distracted with the incident that is said to have happened between me and Cal Vin,” complained Jnr Brown.

“Beefing can be good if it is kept in the studio since artistes get to explore their creative abilities but as soon as someone gets emotional, things tend to get out of hand.

“In the song which I am said to have threatened to beat Jnr Brown up with a bottle of vodka, it was just creative wordplay.” Surprisingly, there seems to be mutual respect between the two artistes, with both admitting that the other is brilliant.

Beefing is part of the hip-hop culture and it is attributed as a significant contributor to the growth of the genre.

Entertainers and musician are performing with fans this chirstmas

Hip-hop scene gets ugly in Zimbabwe

ZIMBABWE - There has never been a shortage of drama on the hip-hop scene the world over, with the beefing phenomenon always taking centre stage. In the USA, these rap wars tend to get violent, with some of the artistes even getting shot in the process. It ...
Share via
x
More Information
x