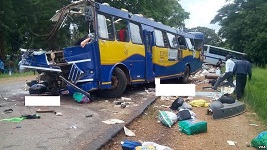 ZIMBABWE – Twenty-seven people died while 47 were injured in road traffic accidents between Christmas eve and Boxing Day, making this year’s yuletude one of the bloodiest in years.

The total number of fatalities could not be established at the time of going to Press with police saying they were still compiling statistics to be released today.

The festive season officially begins on December 15 and runs until January 15.

Ten people died while 42 others were seriously injured in 59 road traffic accidents that were recorded countrywide on Boxing Day alone.

This brought the total number of  people who have died in road accidents that were recorded over the past 72 hours to 27.

On Boxing Day last year, four people died while 27 others were injured in 47 accidents that were recorded. Police impounded 139 vehicles and arrested 6 371 motorists.

“We continue to urge motorists to maintain safe travelling speed and observe rules and regulations. Passengers and pedestrians should not be negligent,” he said.

Seventeen people were killed in road accidents that occurred on December 24 and 25.

A total of 121 vehicles were impounded while last year, 141 were seized.

Parliament has approved an increase in fines for various traffic offences from between $5 and $20 to a maximum $100. The new fines become effective this Friday on New Year’s Day.

Motorists, who proceed against a red traffic light, overtake over a solid white line, drive without a licence, or operate a faulty vehicle without a foot brake will be fined $100 for each offence up from the current $20.

According to a Government Gazette published a fortnight ago, the legislature gave the nod to the passage of the 2016 National Budget which, among other interventions, will see traffic fines being increased.

Government contends that the increase in fines was necessitated by growing carnage on the country’s roads as a result of human error and reckless driving.

An average of five people have died daily in road traffic accidents between 2009 and last year, while two were injured every hour, according to the 2014 Annual Zimbabwe Republic Police Traffic Report.

During the period, the country witnessed a surge in road traffic accidents.

ZIMBABWE - Twenty-seven people died while 47 were injured in road traffic accidents between Christmas eve and Boxing Day, making this year’s yuletude one of the bloodiest in years. The total number of fatalities could not be established at the time of go...
Share via
x
More Information