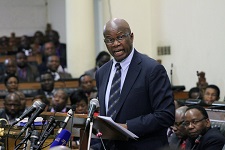 ZIMBABWE – The Office of the President is now handling the Ziscosteel revival issue, amidst indications that Government is still keen to hammer out a deal with a foreign investor to once again position the steel maker as the envy of industry in Southern Africa.

Finance and Economic Development Minister Mr Patrick Chinamasa had said in his 2016 National Budget Statement last November that contracts of Zisco employees “will be terminated on three months notice with effect from December 1, 2015” to free the steel maker’s balance sheet of historical liabilities and prevent “accumulation of new obligations with regards to wages that arise on account of workers that are not producing anything”.

That fed market speculation that a March 2011 US$750 million deal between global steel giant Essar and Government was dead in the water and a new investor was being sought.

It has now emerged that the Office of the President has taken an interest in the matter and discussions between the two parties are ongoing though finding common ground could still be some way off.

Ziscosteel board chair Mr Nyasha Makuvise last week told The Sunday Mail Business, “That issue is now being handled by the President’s Office; so, I can’t comment.”

Industry and Commerce Minister Mike Bimha said Government would not usurp the powers of the board and management of Ziscosteel.

“Government cannot go and retrench Zisco employees. It is a company with a board and management, so you need to phone management and the board then they will tell you what it is all about (or) you should ask him (Minister Chinamasa) because I have nothing to do with that.

“As far as I am concerned, management and the board have a plan that started way before the announcement and they know how best they are going to do it, how many people and the conditions which have nothing to do with us,” said Minister Bimha.

He also said Government was not looking for a new investor and was still engaging Essar.

“We never said we were looking for one, did we? . . . We haven’t closed ranks with Essar but the conditions have changed so we are engaging Essar, we are engaging also other investors so once we know the direction, we will advise you.

“But as you know we entered into an agreement with Essar but the conditions have changed but we haven’t said we have cut ties with Essar. Essar is still there; yes, we are looking at changes in conditions (because) if you recall, when Essar came in, taking over debt was one of the conditions.

“Now there is no debt, so conditions have changed; the prices of iron and steel have also plummeted down so again we are having a relook at the whole issue with the possibility of going on with Essar or going on with other investors.

Through it all, workers say they are in limbo.

Ziscosteel workers council chair Mr Benedict Moyo said there had not been any communication on their fate.

“Management has not come to us as worker representatives yet telling us about the planned retrenchment. Like everyone else we just heard about that in the 2016 National Budget when Minister Chinamasa said so, but nothing has so far happened.

The company is in salary arrears of over US$100 million.

In the 2011 Essar deal, the investor stood to control 54 percent of Ziscosteel, while Government retained the remaining stake. Essar committed to takeover Zisco’s foreign debt, which stood at more than US$300 million, and also share the domestic debt — understood to be over US$72 million — with Government.

After making some investments, the deal hit rocky waters as stakeholders questioned the value of iron deposits that had allegedly been given to Essar for a song. Essar had succeeded in securing an 80 percent holding in Bimco (Buchwa Iron Mining Company), a firm charged with exploring and developing Zisco mining assets like Ripple Creek Iron Ore Mine in Redcliff and its limestone deposits, and Mwanesi iron ore deposit.

The value of the transaction, which includes Zisco’s plant and equipment and the mining assets, was put at US$750 million. Critics argued that the agreement was fundamentally flawed as it effectively handed over a huge chunk of the country’s iron ore reserves to foreigners.

Government has since been holding out for an improved offer.

The then Deputy Prime Minister in the inclusive Government, Professor Arthur Mutambara, suggested that Essar should have coughed up more than US$2,5 billion for the deal. Estimates suggest that the assumed reserves at the Mwanesi claim are between 30 billion and 50 billion tonnes. At the time, the value of iron ore averaged US$103 per tonne, meaning the implied value of the deposits was between US$3 trillion and US$5 trillion.

Government officials conservatively estimated the value at around US$1,5 trillion. But Essar claimed Mwanesi largely comprised “jasphalite ore, which is of average to poor grade, indispersed with hematite ore”.

This assessment was largely viewed as a deliberate attempt to downgrade the quality of the Mwanesi deposit to justify the lower valuation of the asset.

Since then progress has stalled.

ZIMBABWE - The Office of the President is now handling the Ziscosteel revival issue, amidst indications that Government is still keen to hammer out a deal with a foreign investor to once again position the steel maker as the envy of industry in Southern Af...
Share via
x
More Information