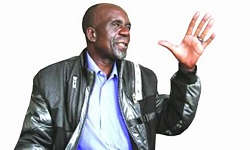 ZIMBABWE – After being neglected by local promoters and with some of his songs allegedly “black-listed” by local radio stations, outspoken Sungura musician, Hosiah Chipanga, has found a new base in Namibia and will be leaving the country this week.

Chipanga yesterday told NewsDay that he was packing his bags with his Vaparidzi Veshoko band and heading to Windhoek in search of the proverbial greener pastures.

“I will be leaving Zimbabwe anytime this week heading for Namibia, where my music is making waves. I have been receiving many invites by promoters and individuals who want me to perform there,” Chipanga said.

Chipanga said he was looking forward to flying the Zimbabwean flag high in the foreign land.

“We were being used by some promoters here to perform for peanuts. We have done a lot for some of them and they achieved what they wanted, but do not even bother to look back at us and appreciate our role and effort,” the Kwachu Kwachu hitmaker said.

The album Gushungo, which proved to be a major success, is reportedly selling very well in Namibia and South Africa.

“The Gushungo song has become their national anthem. By that, the music has promoted itself to the extent of forcing other promoters to look around for me to give the Namibians some live performances,” Chipanga said.

The musician said his loyal fans played a pivotal role in keeping him on his feet, following an alleged “blackout” of his hard-hitting music on national radio.

“Some sections of the media pushed me out of music, after they had misinterpreted my messages. It is sad that some viewed me as a sell-out. I am happy that some people out there, like in Namibia, are now beginning to recognise that I am just an artiste who wants to share the social ills with his people,” he said.

Things started falling apart for Chipangain 2009 with the release of Hero Shoko, an album that was viewed as politically incorrect.

Another album that followed and also blacklisted was Musikavanhu, as it was perceived to be laden with messages that attacked the Zanu PF regime.

Mugabe insulted us by not showing up to read correct speech, Zimbabwe …

ZIMBABWE - After being neglected by local promoters and with some of his songs allegedly “black-listed” by local radio stations, outspoken Sungura musician, Hosiah Chipanga, has found a new base in Namibia and will be leaving the country this week. Chi...
Share via
x
More Information
x