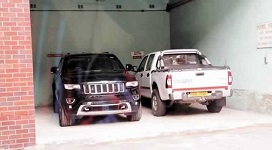 ZIMBABWE – Harare Central Hospital chief executive officer Mrs Peggy Zvavamwe is under investigation following her recent cash purchase of an executive vehicle worth over $88 000 at a time when the institution is struggling to provide even pain killers for patients, sources have revealed.

Sources close to the happenings told The Herald that Mrs Zvavamwe was placed under investigation by the Ministry of Health and Child Care two weeks ago after she ordered the finance department last month to stop all other procurements until they raised $88 359 required for her Jeep Cherokee in line with her conditions of service.

Sources said the money was raised from daily revenue and instead of buying medicines and other sundries, it was used to pay for Mrs Zvavamwe’s vehicle.

The payment was effected last Thursday and a black Jeep Cherokee was delivered to the health institution last Friday.

Suppliers are now said to be demanding their dues after learning that the institution raised such huge cash amounts.

“This is shocking, considering the fact that hospitals including Harare Central Hospital were blaming the economic environment for shortage of medicines in institutions yet they can raise such amounts in a short space of time,” said a source.

“This shows that our priorities are completely misplaced. Imagine patients are walking away with prescriptions every day. The hospital does not have antibiotics, painkillers or even cotton wool. Patients are being asked to buy medicines because the hospital cannot provide them yet they not only prioritise purchase of a vehicle but cash purchase of such magnitude,” added the source.

Another source from the Ministry of Health and Child Care head office weighed in and said that hospitals were expected to purchase vehicles for their CEOs through bank loans and not cash from the hospital coffers.

“The approval from Treasury was that they secure loans for procurement of executive vehicles, which will be paid in monthly instalments. That was a better arrangement as it does not suffocate other areas of service provision,” said the source.

But Mrs Zvavamwe dismissed the allegations saying everything done was above board.

Mrs Zvavamwe said every year end, the institution experiences financial difficulties resulting in suspension of all procurements except for medicines and kitchen goods and 2015 was not an exception.

She said the drug shortages experienced at Harare Central Hospital were similar to those that were being experienced by other central health institutions in the country.

“Our theatre is functioning at full throttle; the children’s hospital is functioning. If there are no medicines, how do these departments work? The shortages we are experiencing are not peculiar to Harare Hospital,” she said.

Mrs Zvavamwe said they started saving for the vehicle in April last year and the money was only paid to suppliers at the beginning of January.

She said getting a loan from the bank would still mean the hospital will be paying something monthly to the bank.

She dismissed allegations that the hospital was now saving money for vehicles for directors saying the approval was only for the chief executive.

Central hospitals throughout the country are experiencing drug shortages largely due to financial challenges experienced in the country.

Usually, hospitals would get their drugs from Natpharm at subsidised rates but Natpharm is unable to procure medicines due to financial challenges.

According to Natpharm, medicines for Government institutions stored at the company only constitute 10 percent while the rest were bought by donors and are meant for specific conditions such as HIV and Aids, tuberculosis, malaria, and maternal health.

ZIMBABWE - Harare Central Hospital chief executive officer Mrs Peggy Zvavamwe is under investigation following her recent cash purchase of an executive vehicle worth over $88 000 at a time when the institution is struggling to provide even pain killers for...
Share via
x
More Information