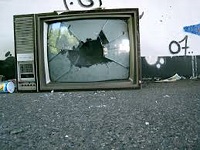 ZIMBABWE – A Budriro 5 couple’s marriage is on the line for the failure of the husband to take care of their matrimonial property.

Misheck Nehumambi, 35, pleaded not guilty when he appeared before Mbare magistrate Bianca Makwande charged with malicious damage to property.

Nehumambi will be back in court today for judgment.

It is alleged that on October 18 Nehumambi had a misunderstanding with Precious Mushati, 25, (his wife)’s brother.

It is also said that Nehumambi walked into the lounge and violently smashed a television set valued at US$50.

Mushati then lodged a complaint with the police leading to Nehumambi’s arrest.

The television set was brought into court as evidence but failed to reveal any signs of damage and showed it was working well.

Man appeared in court for duping in car clearance deal

Husband and wife clashes in the civil court