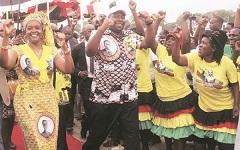 ZIMBABWE – The First Lady Amai Grace Mugabe yesterday candidly declared that she is content with her position as secretary for Women Affairs in Zanu-PF and does not harbour any ambitions to take up a top post in the revolutionary party.

This puts to rest speculation, including that she was aiming for the revolutionary party’s Vice Presidency, formulated by the private media ahead of the 15th Zanu-PF Annual National People’s Conference set for Victoria Falls next month.

Addressing thousands of Zanu-PF supporters in Mbare, Harare, Amai Mugabe had no kind words for a few war veterans, some whom she said were fake, who are sowing seeds of divisions and rekindling factionalism in the ruling party.

She said she was not fighting for any position in the party, but was expending her energy towards fulfilling the promises Zanu-PF made to the people when it resoundingly won a new five-year term in 2013.

“People are suffering while we are fighting for positions,” she said. “I am standing here as the wife of your President and as someone whom you chose to lead the women.

“Ndobva ndagumira ipapo, full stop nga! Handina chimwe chandiri kuda ini. (I am ending there and I don’t need any other position). They might say whatever they want that Amai needs a top post. I was given work to do by the people and I have got the energy.

“There are some people who become unsettled when they see me working for the people and they start gossiping, but when they do that I double my efforts because I have got a mandate to deliver to the electorate.”

The private media has tried in vain to set up Amai Mugabe against Vice President Emmerson Mnangagwa, fabricating that the two led factions in Zanu-PF and are competing to outdo each ahead of the upcoming December 7 to 13 conference.

VP Mnangagwa on Wednesday told parliamentarians that he was not in any way embroiled in a factional and succession tussle with the First Lady.

MDC-T legislators had asked VP Mnangagwa if the First Lady’s rallies were not giving him sleepless nights.

He responded: “If you look at me, do I look like someone who does not sleep? My wife is here and you can ask her if I don’t sleep well,” VP Mnangagwa said to laughter from the house.

At the rally in Mbare, Amai Mugabe said by virtue of fighting the liberation war, a handful of veterans of the struggle did not want to be reprimanded and were not open to advice.

In fact, she said, it was emerging that some of such war veterans creating confusion in the party were bogus and were trying to portray her as someone who hated freedom fighters.

“I am not going to be gagged or silenced,” the First Lady said. “There are some war veterans who are doing silly things in Zanu-PF and we say down with them. We have genuine war veterans, but someone wants to boast that he fought the war. Where was that?

Amai Mugabe did not mention the war veteran whom she said was in the habit of stealing people’s clothes during the liberation struggle.

She added: “People are used to blackmailing others and if I reprimand them they say I no longer like the war veterans. I have my mouth and you can only silence me by shooting and killing me. I will not hesitate to speak against bad behaviour in Zanu-PF.

“I have a big hero at home (President Mugabe) who stayed in prison for 11 years and could not go out to mourn his child when he died. My brother also went to war and it is baffling for someone to say I do not like war veterans.

“Some say Grace Mugabe can never tell them anything, but Zimbabwe is for everyone. If that was the President’s behaviour, because of the power you gave him, could we be happy today? Factionalism is there in Zanu-PF and I warned those doing it and the next thing is they want to demonstrate against me. Zviitei tione!”

Amai Mugabe paid tribute to Ambuya Idah Hwiza, who housed freedom fighters who bombed fuel tankers in the then Salisbury in 1978, at her home in Mbare, saying many such acts by heroic people countrywide contributed to the success of the liberation struggle.

The bombing of the fuel tanks delivered a fatal blow to the Rhodesians and provided a defining moment of Zimbabwe’s war of liberation as whites realised that fighting was now at their door step, and it also seriously affected the sanctions-riven Smith regime.

Prior to this act, the liberation war had been mainly confined to the rural areas, small towns and farming areas.

“When she was approached, it did not take long for her to accommodate the eight freedom fighters,” said Amai Mugabe. “The job was done and this is the day Ian Smith suffered a major blow because the fuel was being used to commit several atrocities in and outside the country.”

Amai Mugabe called for peace and urged the youths to desist from committing acts of violence.

This comes after a Chitungwiza man, Proud Mupambwa axed his two friends to death following a misunderstanding last weekend before taking his own life while in police custody.

The private press attempted to link Mupambwa to Zanu-PF, but Amai Mugabe said the incident had nothing to do with the ruling party.

“Lets solve our issues amicably because you commit murder over a simple issue,” she said. “Divert that energy you use in fighting towards working for yourself or your family.”

Amai Mugabe took time to give people updates on the progress Government has made in implementing its economic blue print, Zim-Asset.

Grace Mugabe mudded waters to ouster Mujuru but with Mnangagwa, she is dicing …

I harbour no other ambition – First Lady

ZIMBABWE - The First Lady Amai Grace Mugabe yesterday candidly declared that she is content with her position as secretary for Women Affairs in Zanu-PF and does not harbour any ambitions to take up a top post in the revolutionary party. This puts to rest s...
Share via
x
More Information
x