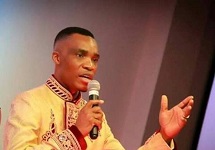 He took to social media to announce that the goblin incident at Road Port and the corpse in the plane fulfils his prophecies.

In his post he wrote that prior to the incidents he had prophesied on the work of satanists and blood sacrifices.

“ I see it both Prophecy fulfilled,” he wrote.

This comes after he was accused of stage managing miracles by people who witnessed him fishing out a supposed goblin in a bus bound for South Africa claiming that it had been ‘planted’ by satanists to cause an accident.

On the other hand, Makore claims that the discovery of a corpse in a plane bound for South Africa, which had stopped to refuel at Harare International Airport fulfils his prophecy.

In his posts he argues that both these incidents show the work of the devil exposed.

ZIMBABWE - Upper Room Ministries leader Apostle Eugene Makore who caused a stir at Road Port terminus a goblin drama, claims that the body found in an American cargo plane fulfils his prophecies. He took to social media to announce that the goblin incident...
Share via
x
More Information
x