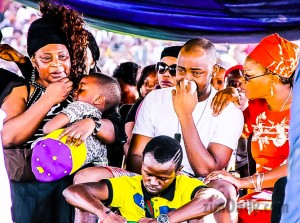 HARARE – Former Zimbabwe captain Peter Ndlovu says he could have led the Warriors to the World Cup if he had accepted God earlier in his life.

As Warriors captain, Ndlovu led the team to qualify for two Africa Cup of Nations (Afcon) finals in 2004 and 2006.

Under the guidance of the speed merchant, Zimbabwe narrowly missed on qualifying for the 2006 World Cup in Germany when they finished third in Group Four only three points behind pool winners Angola.

Ndlovu, who has given tabloid headline writers plenty of fodder with his off-field antics, feels he could have been a better Warriors captain if he had accepted the Almighty sooner in his career.

The former Coventry and Birmingham winger bared his soul on Robert Marawa’s show on Metro FM in South Africa on Friday night.

Ndlovu decided to turn to Christ after he was involved in a tragic accident that killed his elder brother Adam and a female companion, Nomcebo Tshili near Victoria Falls in December 2012.

“If I had known God in my career, I would have been a better Peter Ndlovu and with Zimbabwe being led by a God fearing captain we could have played up to the World Cup,” said Ndlovu.

The horror crash left Ndlovu with two fractured legs but the Warriors legend has fully recovered from the injury and he is now the team manager of South African Absa Premiership champions Mamelodi Sundowns.

During the radio interview, Ndlovu, who is the highest capped Zimbabwean with 100 caps and 38 goals, went down memory lane to talk about his days when he was signed by English club Coventry when he was only 16 years old.

The teenage Ndlovu scored the winner against Arsenal at Highbury on his Coventry debut in August 1991 to set the tone for the rest of his career with the Sky Blues.

“To me that was the beginning; it was the emergence of Peter Nldovu when I scored that goal against Arsenal,” Ndlovu recalled.

“When Coventry signed me, John Sillett said we are signing a gem and they threw me into the first team straight away.

“To me it was just playing football and I grabbed my opportunity with both hands.”

After he scored that goal a number of clubs including Arsenal came knocking on Coventry’s door to inquire about the teenage sensation but the Sky Blues refused to budge and offered Ndlovu an improved contract.

“At Coventry I had a good manager in Bobby Gould. He was like a father to me and he said to me, ‘there we go a lot of teams want you,’ but I said ‘I belong to Coventry’,” said Ndlovu.

“I have just signed a contract here and I don’t want to go anywhere. To me I didn’t see a point for me going away when I had just arrived and scored a goal at the club.

“That was only the beginning of my career. As time went on there were plenty of other offers but I stuck with Coventry because they gave me my first professional contract.”

Ndlovu revealed the details of his first professional deal he signed with the Sky Blues.

“I was only concerned with playing at that time and I can tell you my first pay at Coventry,” he said.

“My first salary at Coventry was £800 per week but after two weeks they called me into the office and say they were going to change my contract because sum other clubs were increase their interest in me.

“After that they improved my contract immensely within two weeks of me scoring that winner at Highbury.

“I can tell you that they improved my salary by more than 10 times. When you play well you deserve to get that kind of money.”

Ndlovu went on to make 197 appearances for the Sky Blues in the English Premiership scoring 39 goals between 1991 and 1997.

He then moved to Birmingham where he cloaked up 109 appearances and 23 goals in five years.

In England, Ndlovu also played for Sheffield United and Huddersfield Town before coming back to South Africa in 2004 to join Abafana be Style.

The Zimbabwean has the record of the African with highest number of years playing top flight football in England after he spent 13 years in that country. Daily News

I should have accepted Jesus Christ earlier – Peter Ndlovu

HARARE - Former Zimbabwe captain Peter Ndlovu says he could have led the Warriors to the World Cup if he had accepted God earlier in his life. As Warriors captain, Ndlovu led the team to qualify for two Africa Cup of Nations (Afcon) finals in 2004 and 200...
Share via
x
More Information
x