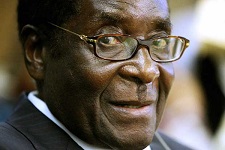 ZIMBABWE – President Robert Mugabe yesterday launched a tirade against critics who say he has overstayed in power, vowing to hang on to power until he dies.

Mugabe became AU chairperson in January 2015 amid pomp and fanfare, but local analysts and opposition groups say his term was a disaster.

In his hour-long speech, the soon to be 92-year-old leader said he would lead Zimbabwe until God called him.

“I will be there until God says come, but as long as am alive I will head the country, forward ever, backward never,” he said.

Mugabe said those who were saying he must hand over power to others were not democratic. He said such calls were emanating from Europe.

President Mugabe who was preceded on the podium by UN secretary-general Ban Ki-moon and the chairperson of the AU Commission Nkosazana Dlamini Zuma was cheered wildly as he took a pot shot at United States President Barack Obama.

“There is Obama today. What is he? A voice made to speak their language, not our language,” he charged.

“Blacks suffer in the US today, there is no education for all, health for all.’’

Mugabe had stumbled lightly before he reached the podium. The Zimbabwean leader has been in power since independence in 1980.

“Mugabe’s tenure of office didn’t bring any positive results to Zimbabwe in particular and Africa in general,” he said.

“For instance, the hot political spots in Africa such as Burundi, Somalia, Libya and the DRC are still in turmoil.

“Mugabe didn’t do anything meaningful and tangible to resolve the various political problems in these troubled African countries.

“He was just hoping from one plane onto another in 2015 as the African political hot spots continued to burn.”

Gutu said Mugabe has never been known to be an astute diplomat and trouble-shooter, but a talkative leader with less action.

“As for Zimbabwe, Mugabe was basically an absentee president in 2015 as he was always travelling,” he said.

“He travelled out of Zimbabwe a record 44 times, gobbling more than $60 million from the bankrupt national Treasury in the process, while the Zimbabwean economy remains in a comatose condition.”

He described him as the worst AU chair Africa ever had.

He said Mugabe failed to provide political leadership to the continent, leaving most African problems unresolved and exploding into full-scale conflicts.

Serious problems are rife in South Sudan, Mali and Burkina Faso where General Gilbert Diendere staged a coup on September 16 2015.

In Burundi, another genocide is almost unfolding under Mugabe’s tenure after Pierre Nkurunzinza bulldozed himself to a third presidential term.

There is also growing insecurity on the continent with the rise of terror groups such as Boko Haram, Al Qaeda and ISIL in East, West and Northern Africa. This has forced many Africans to flee to Europe, with some perishing at sea.

“To all these heinous acts, the continental leader seemed to turn a blind eye, maybe realising he has often relied on the same tactics to extend his rule.

During his tenure, Mugabe traversed the globe for presidential inaugurations and attended international conferences, but remained mum on the challenges some African countries were facing.

ZIMBABWE - President Robert Mugabe yesterday launched a tirade against critics who say he has overstayed in power, vowing to hang on to power until he dies. Mugabe became AU chairperson in January 2015 amid pomp and fanfare, but local analysts and oppositi...
Share via
x
More Information