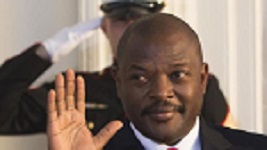 ZIMBABWE – Beseiged Burundi President Pierre Nkurunziza has reached out to President Robert Mugabe in attempts to ward off the impending deployment of an African Union peacekeeping force to halt killings on civilians allegedly by his regime.

Nkurunziza has in the recent past come under strong rebuke from the international community for seeking a third term which ignited widespread protests in his country since last year, culminating into total chaos.

The turmoil has since claimed 400 civilians in just a few months and forced nearly 200,000 into exile.

The 52-year-old has past few weeks been resisting attempts by the AU to deploy peacekeepers to protect civilians.

The Burundi leader took time to dispatch his envoy, major general Everiste Ndayishimiye to Harare on Tuesday ostensibly to upraise the outgoing AU chair on the real situation in the troubled East African country.

…We have confidence that they (AU leaders) will know the reality and that they will not consent to send troops in Burundi, Ndayishimiye later told journalists after emerging from a two-hour closed-door meeting with President Mugabe.

However, opposition PDP secretary general Gorden Moyo felt Mugabe had no moral authority to sit over any discussion aimed at resolving the tense situation in Burundi given his own experiences in his country 2008.

Mugabe can only tutor Nkurunziza from the syllabus of stayism he knows best, Moyo said in an interview with NewZimbabwe.com Wednesday.

He has memorised the curriculum over the past 36 years. He knows no other advice than the one he has lived.

Back in 2008, President Mugabe suffered a humiliating defeat from archrival Morgan Tsvangirai of MDC-T in the first round of the presidential race.

The defeat incensed his followers into a violent witch-hunt in rural Zimbabwe which claimed over 300 MDC-T supporters, according to the opposition.

Soon after he was sworn in for another term and while preparing for an AU summit in the Egyptian coast city of Sharm el-Sheikh, the soon to be 92-year-old leader dared fellow African leaders to condemn him, insisting all his peers were equally tainted.

Nkurunziza leant what he is doing in Burundi from Mugabe himself, Moyo said.

Equally, MDC spokesperson Kurauone Chihwayi said despite finding it appropriate to approach a sitting AU chair, Nkurunziza was also lucky to find a president he could easily relate to in terms of brutalizing his own people.

The visit by the Nkurunziza’s envoy ahead of the crucial summit raises eyebrows of all those sympathising with the people of Burundi, Chihwayi said.

The AU should deal with political criminals who abuse their offices to extend their terms.

The MDC spokesperson said current disturbances in Burundi were a carbon copy of what transpired in Zimbabwe in 2008 when houses were burnt, limbs chopped and many innocent civilians killed.

He added: Mugabe will handle the Burundi issue with dirty hands since Nkurunziza and the Zimbabwean leader are birds of the same feather.”

Harare based political analyst Fambayi Ngirande said the Burundi case, just like Zimbabwe, was yet another endorsement of big man politics.

The fact that liberal electoral democracy seems incompatible with modern state as it stands today in Burundi, Uganda, Rwanda, it has always been Zimbabwe where term limits have been thrown out of the window to accommodate big man and elites’ interests at the expense of democratic order.

I do not see Mugabe as an arbiter siding with the liberal democratic order of term limits.

ZIMBABWE - Beseiged Burundi President Pierre Nkurunziza has reached out to President Robert Mugabe in attempts to ward off the impending deployment of an African Union peacekeeping force to halt killings on civilians allegedly by his regime. Nkurunziza has...
Share via
x
More Information