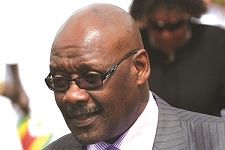 ZIMBABWE – Health minister David Parirenyatwa has claimed that some myths and falsehoods about Zimbabwe were dispelled at the just-ended International Conference on HIV and STIs in Africa (Icasa).

“People came expecting the worst because of the sanctions and what they read in the media, but they were absolutely surprised,” he said in an interview with South Africa’s news channel, ANN7.

Parirenyatwa said this clarification had benefited the country and given it a better platform.

Calling the conference a success, Parirenyatwa said the over 4 500 delegates were in a very mature mood, as they absorbed and learnt from scientists, experts and best practices.

“Usually, countries hosting such conferences are given two years to prepare, but we did it in six months. The idea is to ignite your whole government system and be freely communicating,” he said.

Zimbabwe won the bid after the preferred hosts Tunisia pulled out due to security concerns.

However, the bidding by Zimbabwe was not without fault, as they were once put on the spot to address concerns that had been raised over safety of key populations like the lesbians, gays, bisexuals and transgender (LGBT).

Following the announcement of Harare as the Icasa 2015 host, concerns were raised about the safety of key populations, particularly men who have sex with men (MSM) and LGBT delegates and participants at the conference.

An investigation team was dispatched to Zimbabwe from July 22 to 25 on a mission to assess the preparedness of the government to host the conference without discrimination against participants and delegates.

After the mission, the team, which included organisations like Africa Sex Workers’ Alliance and African Men for Sexual Health and Rights, among others, said the Zimbabwean government had assured them of the safety of these groups.

However, during the conference, there were reports of harassment of these groups, whose materials was seized at Harare International Airport and some of their stands torn down.

The activists complained of continuous intimidation by police, who occasionally ordered them to take down some of the material, saying it was too explicit and inciting.

“This (harassment) has been going on every day and my question is: If they were not keen for us to come here, why did they invite us then?” gay activist, Michael Ighodaro asked.

But Parirenyatwa said key populations had freely interacted with others.

“Key populations were represented and were free say to what they wanted,” he said.

ZIMBABWE - Health minister David Parirenyatwa has claimed that some myths and falsehoods about Zimbabwe were dispelled at the just-ended International Conference on HIV and STIs in Africa (Icasa).  “People came expecting the worst because of the sanctio...
Share via
x
More Information
x