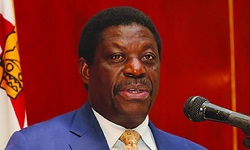 ZIMBABWE – The International Monetary Fund (IMF) could lend Zimbabwe $500 million, as early as mid next year subject to the country clearing its arrears with international lending institutions, an IMF executive has said.

The money would be part of the IMF stipulated quota for Zimbabwe, which is SDR350 million (about $485 million). Special Drawing Rights (SDR) is an international reserve asset, created by the IMF in 1969 to supplement its member countries’ of official reserves. It fluctuates against major currencies.

Speaking on the side lines of the Zimbabwe National Chamber of Commerce Business Review Conference yesterday in Harare, IMF country representative Christian Beddies said the lending is dependent on the commitment from government in completing the economic reform plan, the Staff Monitored Programme (SMP). The third and final review of the SMP will be done in the first quarter of 2016.

“Zimbabwe has a quota, which is SDR350 million, and how much of that quota we would lend over a three year period. It also depends on the balance of payment needs but they could get 100% of that.”

Beddies said Zimbabwe has to meet at least three requirements that include clearing the $1,8 billion arrears to the World Bank, IMF and the African Development Bank.

He said Zimbabwe should set up a financial programme that addresses the deep rooted structural issues and approach the Paris Club for a debt treatment before IMF can consider lending to Zimbabwe.

The Paris Club is an international informal group of officials from creditor countries, whose role is to find co-ordinated and sustainable solutions to the payment difficulties experienced by debtor countries.

Confederation of Zimbabwe Industries vice-president, Sifelani Jabangwe said the loan from the IMF and other international lending Institutions is cheaper, as current interest rates were unfavourable.

“From our end, as the private sector, we are concerned about how soon we have access to finance because right now the finance we have access to is around anywhere between 15% to 28% that is unsustainable,” he said.

“As others have highlighted, as soon as you get that loan it is a non performing loan because there is no way you can perform.”

Industry and Commerce minister Mike Bimha said foreign direct investment “is an affordable way of bringing in equity since it is cheaper than loans”.

ZIMBABWE - The International Monetary Fund (IMF) could lend Zimbabwe $500 million, as early as mid next year subject to the country clearing its arrears with international lending institutions, an IMF executive has said.  The money would be part of the IM...
Share via
x
More Information
x