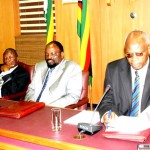 ZIMBABWE – The head of an IMF mission which has just visited Zimbabwe, Domenico Fanizza, said there were no quick and easy fixes to Zimbabwe’s economic problems and spoke of the need to deepen reforms. The IMF made it clear that Zimbabwe needed to create a friendly investment climate and mentioned in particular the need for clarity on the indigenisation policy. It added that the top priority was to reduce public sector employment costs.

Finance Minister Chinamasa has already said he wants to reduce the wage bill from more than 80% of government revenue to less than 40% in line with IMF recommendations, adding to the unemployment crisis (see: http://www.zimeye.com/imf-no-cash-to-zimbabwe-for-the-next-3-years/ and http://www.theindependent.co.zw/2015/09/11/zim-faces-tougher-times-ahead-imf/).

For his part, the European Ambassador to Zimbabwe Philippe van Damme this week said Zimbabwe needed a return to the rule of law if it is to attract foreign investment. He said investors were looking for ‘predictability of the economic and financial environment’ based on a legal framework that respects the principles of accountability, transparency and non-discrimination (see: http://www.theindependent.co.zw/2015/09/11/zim-must-return-to-the-rule-of-law-eu-ambassador/).

The comment by the EU Ambassador and damning assessment by the IMF will be part of the message the Vigil will be presenting to any customers gullible enough to attend a Zanu PF fundraiser in London on 22nd September hosted by the international law firm Stephenson Harwood LLP (acting on behalf of the shadowy ZBN and CMG international media group).

Here is a letter we are sending to Stephenson Harwood;

‘We learn that you are facilitating a meeting to prop up the illegal regime of Robert Mugabe in Zimbabwe. He has maintained his grip on power through rigged elections and the galvanising force in his regime is the looting of the country’s resources.

This is to advise you that we will be outside your office on 22nd September protesting against the visit by representatives of the regime. We note that among the three Mugabe ministers attending is Obert Mpofu. If you had performed due diligence you would be aware that he is said to be one of the most corrupt men in Zimbabwe. For details of his vast, unaccountable wealth see for instance: http://nehandaradio.com/2012/11/16/from-rags-to-riches-the-obert-mpofu-story/.

We will draw to the attention of prospective investors to observations by the IMF mission which has just visited Zimbabwe calling for clarity on the regime’s propensity to steal everything and the latest remarks by the EU Ambassador to Zimbabwe urging Mugabe to bring back the rule of law and respect for property rights.’

The Vigil remembered civil rights activist Itai Dzamara on the 6-month anniversary of his abduction by government agents. A group of five or so Zimbabwean men came to the Vigil table and questioned us about our poster: ‘Who killed Itai Dzamara’. They demanded to know how we knew he had been killed. They also read our petition condemning Mugabe and threw it down without signing it. This is in keeping with iefforts to destabilise the Vigil by people who we suspect are paid by the CIO. We suppose it is to be expected with the increased activity in Zimbabwe of our sister organisation Restoration of Human Rights in Zimbabwe (ROHR).

· Ephraim Tapa and Rose Benton were interviewed by the International Business Times about the Vigil and the situation in Zimbabwe, see: http://www.ibtimes.co.uk/focus-torture-rape-disappearances-rampant-zimbabwe-1519414.

· Thanks to those who came early to help set up: Esther Nyambi, Humphrey Dube, Michael Tinarwo, Livert Zhuwao and Fungayi Mabhunu. Thanks to Esther, Livert and Humphrey for looking after the front table throughout the Vigil.

For latest Vigil pictures check: http://www.flickr.com/photos/zimbabwevigil/. Please note: Vigil photos can only be downloaded from our Flickr website.

FOR THE RECORD: 19 signed the register.

No bonus joy for civil servants

ZIMBABWE - The head of an IMF mission which has just visited Zimbabwe, Domenico Fanizza, said there were no quick and easy fixes to Zimbabwe’s economic problems and spoke of the need to deepen reforms. The IMF made it clear that Zimbabwe needed to create...
Share via
x
More Information
x