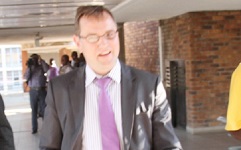 ZIMBABWE – The International Monetary Fund (IMF) and government are optimistic that Zimbabwe will meet its targets during the Staff-Monitored Programme (SMP) third and final review that is set for this week.

The IMF team arrives this week to do the review and to also hold consultations for Article IV.

IMF resident representative Christian Beddies said he would not want to pre-empt the mission’s work, which was part of the review that would take place this week.

“The SMP appears to be on track, but it will be the upcoming mission that will undertake the third and final review of the SMP,” he said.

“They will also conduct the annual Article IV consultation. This is an exercise where we take a broader and medium term look at the economic challenges in the country.”

An SMP is an informal agreement between authorities and the IMF to monitor the implementation of the economic programme.

Beddies said Zimbabwe’s economic situation remained challenging and the upcoming mission would revisit macroeconomic assumptions and incorporate the latest information in its forecasts.

He said in the October 2015 report, the fund said there was risk to the then projected outlook and with the adverse weather conditions and lower commodity prices, these risks had intensified.

Reserve Bank of Zimbabwe governor John Mangudya, who is also chairman for the debt clearance and re-engagement committee, said he was happy with progress made in re-engaging the IMF.
“All is in order,” he said. “We are happy with our performance under the SMP on all the targets.”

Zimbabwe started working on the SMP in 2014 and the IMF team reviewed the progress before the country moved to the second and third reviews.

The country met targets for the SMP in the first and second reviews.

Last year when the IMF team visited, the head of the delegation Domenico Fanizza said if Zimbabwe succeeded in the third review, it would get a three-year credible reform programme that would tackle underlying problems in the economy.

Zimbabwe’s economic fortunes are hinged on the successful completion of the SMP as it will pave way for the country to pay off its $1,8 billion arrears to three preferred creditors, as agreed during the Lima meetings last October.

This will unlock fresh capital for the country that is facing liquidity challenges and a deflationary environment.

Zimbabwe has a debt of $8,4 billion owed to international, regional and domestic creditors.

Last year, the government, through its representatives, went to Lima, Peru to engage with the creditors in a bid to pave way for debt clearance.

The government is awaiting the go-ahead from IMF to start clearing the arrears, as well as to engage stakeholders.

If the country succeeds in the third review, the government would pay its $1,8 billion arrears — which will unlock fresh capital for the country.

ZIMBABWE - The International Monetary Fund (IMF) and government are optimistic that Zimbabwe will meet its targets during the Staff-Monitored Programme (SMP) third and final review that is set for this week. The IMF team arrives this week to do the review ...
Share via
x
More Information
x