ZIMBABWE – Siya Bhebhe, a six-year-old girl from Botswana, makes a trip to a small village in the south of Zimbabwe, to give toys and teaching aids to school kids. ABC’s Dingani Masuku documents her journey.

Filabusi, a district in Zimbabwe’s Matabeleland South province, is dry despite this being the rainy season.

The rains are late this year and farmers are anxious, as they entirely depend on them for the little subsistence agriculture they engage in.

The dry winds blow dust on the villagers as they sit under the shade of mopani trees talking about the late rains.

But for children in Sababa, one of the villages in the area, this is a day they will remember for a long time, thanks to Siya Bhebhe, a six-year-old girl.

Siya, who was born in Botswana to engineer Vezi Bhebhe and his wife Noma, has a pleasant surprise for the pupils at Sababa primary school that will take their minds off the scorching sun for a while.

She has brought a box full of toys and learning aids for the pupils.

In the morning I visit Siya’s home and find her having breakfast of porridge in her grandmother’s traditional kitchen.

I ask about her plans for the day and she tells me she is going to Sababa primary to donate toys, charts and sweets to the school children. I am amazed how a six-year-old could have come up with such an idea.

She tells me that one day back at home in Botswana, her father was telling her stories about life in the village of his birth. He told her how children walked to school for four kilometres and that toys were an unheard of luxury.

That was the moment she decided all children in the village should have toys.

We drive to the school to witness her charitable act.

All the time, I am concerned whether she will she be able to keep her composure during the whole thing.

We arrive when the children are already at assembly and singing so sweetly that anyone passing by would have been convinced this is a trained choir.

Singing is in the DNA of African people — it is through music that they teach, praise, keep memories and welcome visitors. So with music they welcome Siya and her box of goodies.

Teachers introduce her to the pupils and she confidently stands in front of them and cries out “good morning”. A thunderous “good morning” echoes back from the 100 or so children gathered here.

With the pleasantries done, Siya addresses the expectant pupils: “I have brought you toys, charts and sweets and I hope you like them.” Without further ado, she invites the prefects to help her distribute the sweets.

For children in most rural areas in Zimbabwe, sweets are a luxury only seen on Christmas and, maybe, on birthdays when your parents remember the day.

The sweets are quickly handed out and the children’s faces light up. A boy wipes away mucus and, before peeling off the wrapper and throwing the candy in his mouth, saliva runs down his chin — obviously his taste buds have been working overtime.

The pupils then sing an allegiance song to the constitution of Zimbabwe followed by their school’s own anthem which they belt out proudly as they march towards their classrooms.

Siya, however, has not dished out all the goodies, seemingly keeping the best for the last.

The box full of toys and charts follows her to the pre-school class where we find the excitement at fever pitch. The children are dancing and singing but their eyes are fixed on Siya’s box.

When the teacher invites Siya to start distributing the toys, I move over with the camera to film the occasion.

“How are are you going to share out the toys?” I whisper curiously, anticipating there will be commotion.

She whispers back: “I will start with the girls,” and I immediately ask why. She looks at me with a knowing eye and smiles. I have my answer. “Girls first in the line,” she calls out.

The girls form a neat single file and she distributes first the dolls then the other assorted colourful toys. When the boys’ turn comes, she dishes out soccer balls first, then puzzles and other assorted goodies.

But she is not yet done as she pulls out her charts and starts a lesson on body parts.

She ends the day by capping two graduates who are going to class one next year.

At the end of it, I am left wondering if children can so clearly see the problems in Zimbabwe, what about the adults, and what are they doing about it?

Siya is an inspiration to both adults and the young and I wish her charitable works grow as she tells me she will be doing this again. 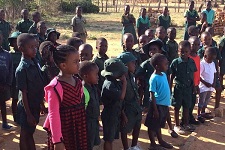 In Zimbabwe, a 6 eary girl stands up to the challenge of cheering up the kids

ZIMBABWE - Siya Bhebhe, a six-year-old girl from Botswana, makes a trip to a small village in the south of Zimbabwe, to give toys and teaching aids to school kids. ABC's Dingani Masuku documents her journey. Filabusi, a district in Zimbabwe's Matabelelan...
Share via
x
More Information
x