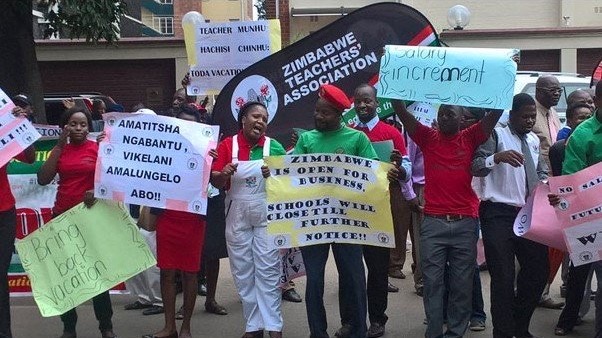 HARARE – Incapacitated Teachers have maintained their demands for restoration of their 2018 salaries ahead of second term schools reopening to match the high cost of living and restore their purchasing power.

While the government has been offering salary increments , teachers in response have blasted the reviews which are way below the Poverty datum line.

Following the recent 45% salary increment announced by the government the lowest paid teacher earns $28 600 against a PDL of $40 000.

Schools in the country are currently closed as part of measures to curb COVID19.

In the process of preparing schools reopening teachers have called upon government to meet their demands and capacitate them.

Posting on Microblogging site Twitter , The Progressive Teachers Union of Zimbabwe said , “ What we are sure of is if they are also preparing for learning to actually happen when schools happen. “

Last week Tuesday government announced that civil servants’ salaries would be increased by 45% to 50%.

“The nominal increase in civil service salaries does nothing to ameliorate their situation.”

Meanwhile , Teachers have been issuing threats of a strike when schools reopen tor the second terms, until their salary demands have been met.

Since last year teachers have been demanding payment of salaries in USD to cushion them against the ailing economy with most prices of goods and services being charged in foreign currency.

HARARE - Incapacitated Teachers have maintained their demands for restoration of their 2018 salaries ahead of second term schools reopening to match the high cost of living and restore their purchasing power. While the government has been offering salary i...
Share via
x
More Information