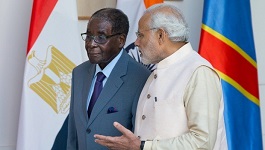 Mugabe was going to greet Modi when he missed a step and stumbled.

An alert Modi immediately stepped forward and extended his hand to hold Mugabe’s before helping him up the podium.

The two promptly shook hands with Mugabe pretending all was well.

But soon after the handshake, the Indian leader yet again came to his guest’s rescue as he, with the assistance of two other aides, helped Mugabe to step down the podium.

Early this year, Mugabe missed a step and tumbled as he came down the podium at the Harare International Airport.

Mugabe had just addressed his supporters soon after his arrival from Ethiopia where he had been elected the chair of the African Union.

Then information minister Jonathan Moyo made headlines after he claimed that Mugabe had managed to break his fall.

A few weeks after the fall, a picture emerged showing alert body guards watching over Mugabe as he stepped down an aircraft.

The picture showed Mugabe’s body guards surrounding the 91-year old as he carefully stepped down the airstair with three of them watching closely suggesting that there were indeed fears that he could tumble down yet again.

Not long after that, Mugabe was ambushed by Nigerian journalists who humiliated him as he arrived to attend the inauguration of President elect Buhari.

The scribes swarmed around Mugabe asking when he was going to step down considering both his advanced age and the length of his rule.

Both the Harare International Airport and the Indian incident bring memories of the 1991 CHOGM meeting during which the then Malawian leader, Kamuzu Banda, fell in Harare in full view of other leaders who included the Queen.

ZIMBABWE - Indian PM Narendra Modi Thursday helped President Mugabe break his fall after the 91-year old leader lost balance and nearly tumbled while walking up the podium. Mugabe was going to greet Modi when he missed a step and stumbled. An alert Modi i...
Share via
x
More Information