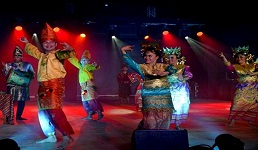 1.7kViews
0 Shares Share on Facebook Share on Twitter
ZIMBABWE – Local dance lovers will next year have a taste of the Indonesian dance “cuisine” when the Asian country brings the traditional dance and performance group, Sumbar Talenta, to showcase their dance routines in Zimbabwe.

The group is renowned for performing cultural dances that are part of Indonesia’s history.

Speaking on the side lines of the screening of three Indonesian films to the local audience, Indonesia Ambassador Stephanus Yuwono said he met with the group whose members expressed interest to perform on the local stage.

“I have already made arrangement for them to have a performance here in Harare,” Yuwono said. “The performance of this Indonesian group will include dancing and singing.”

This comes after the screening of three films — Guru Bangsas, Filosofi Kopi (Coffee Philosophy) and Tabula Rasa — between Saturday and Monday night.

Filosofi Kopi is a tale about soul searching and making peace with the past through coffee and has been screened in festivals in China, South Korea, Taiwan and the Philippines, while Tabula Rasa relates the emotional story of a downtrodden man who has lost the will to live, but rediscovers his purposed befriending a woman who teaches him how to cook.

Yuwono said he will explore ways of raising cultural exchange programmes between Zimbabwe and Indonesia next year.