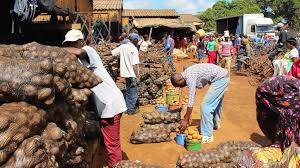 BULAWAYO – The Informal Economy Agenda Coalition, a coalition representing various informal traders associations said while it recognises the efforts to curb the spread of Covid-19 through the reintroduction of tighter regulations, the government should also consider measures that would ensure the survival of the informal sector.

It said it was concerned by the outright closure of markets while expressing the hope that the government reviews the lockdown measures and allow them to operate under strict compliance mechanisms.

“The Informal Economy Agenda Coalition, representing informal workers, traders, vendors and cross-border traders, acknowledges and welcomes efforts made by the Government to try and contain the rapid spread of Covid-19. Yet again a lockdown is upon us and necessary under the prevailing circumstances to protect and save lives. We realise that this move has been done in the interest of public health in light of the recent upsurge in Covid-19 positive cases and death.

“It is however of concern to the informal sector representative organisations that there are no provisions for social protection for vulnerable groups of people such as the members of our organisations. We are also concerned that market places have been placed on outright closure. It would have been preferable if licensed traders were allowed to continue operating with strict Covid-19 protocol compliance,” said the coalition of informal sector stakeholders in a statement.

They further highlighted that the Bulawayo Vendors and Traders Association has already made significant strides in providing material such as masks, sanitisers and water dispensers for washing hands across various markets in the city.

The Coalition further said it was disappointed by government cushioning allowances which failed to benefit the majority of the informal sector while also appealing for the government to consider women as a priority when introducing such regulations.

“It is also disappointing that the Cushioning Fund announced by Government in April 2020 came very late and did not benefit the majority of informal traders. Informal cross-border traders will be badly affected by the new regulations. This will undoubtedly lead to loss of life at illegal crossing points on the crocodile-infested Limpopo River…

“It is emphasised that the needs of women must always be considered a priority when such regulations are introduced.”

Furthermore, they said they were appealing for dialogue with the relevant authorities so that adjustments can be made to create a win-win situation for every stakeholder.

Zimbabwe was placed on a stricter lockdown following the recent spike in infections, with the minister of Health, vice president Constantino Chiwenga announcing several stringent measures accompanied by a 6 pm to 6 am curfew.

Teacher’s Unions Not Consulted on Reopening of Schools

BULAWAYO - The Informal Economy Agenda Coalition, a coalition representing various informal traders associations said while it recognises the efforts to curb the spread of Covid-19 through the reintroduction of tighter regulations, the government should al...
Share via
x
More Information
x