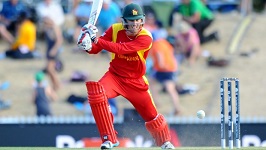 958Views
0 Shares Share on Facebook Share on Twitter
ZIMBABWE – Seam William Sean Williams has been ruled out of Zimbabwe’s the upcoming tour of the United Arab Emirates (UAE), where they will face Afghanistan and is also doubtful for the Bangladesh tour.

In the UAE Zimbabwe will face Afghanistan in five one-day internationals (ODIs) and two T20s starting next Saturday, while they have two Tests scheduled with a T-20 series also having been mooted ahead of the World T-20 qualifiers next month.

Williams had been included in Zimbabwe’s 15-man squad which leaves the country for Dubai on Tuesday even though he carried a hamstring injury which resulted in him missing Mid West Rhinos’ Logan Cup match against Matabeleland Tuskers.

Head coach Dav Whatmore told Zimbabwe Independent Sport in an interview yesterday that the 29-year-old left handed batsman had been ruled out of the upcoming series and would be replaced by spinner Tendai Chisoro.

“The boys started camp on Tuesday and we have allowed the guys to play for their franchises because we believe provincial cricket is important and will definitely give the guys some competitive game time before we resume camp. Sadly we won’t have a lot of time together since we are leaving on Tuesday with the first match,” he said.

“Sean Williams has been ruled out of for the Afghanistan series. We had initially included him in the squad with the hope that he would have recovered but he is still feeling the pain and we have decided against taking any further risks and he has been replaced by Tendai Chisoro.”

Chisoro made both his ODI and his Twenty20 International debuts against Afghanistan in October and he gets another opportunity to stake a claim in the team.

The 61-year-old Australian also welcomed the return of senior batsman Hamilton Masakadza, whom he said had earned his place back in the squad after doing well for both the Zimbabwe A and his franchise Mountaineers.

“He did well for the Zimbabwe A against both Bangladesh and Ireland and he has also been consistent for Mountaineers. Based on those performances he has certainly earned his place back into the side and will be a valuable addition for the team not only for the upcoming tour but going forward,” he said.

Also joining Masakadza back in the team, which began camp in Harare on Tuesday, is Peter Joseph Moor, who only has two ODI caps, which he earned when Zimbabwe toured Bangladesh last late last year. Like Masakadza, Moor was one of the top performers for the ‘A’ side against Bangladesh ‘A’ and the Ireland team before continuing with the good run of form for the Mid West Rhinos.

The selection panel has also kept faith in the youngsters with young all rounder Luke Jongwe and spinner Wellington Masakadza in the squad while Neville Madziva has also been rewarded for his match winning heroics in the last T20 against Bangladesh.

Afghanistan toured Zimbabwe in October winning the ODI and T20I series, 2-3 and 0-2 respectively to become the first Associate nation to achieve that feat against a Test-playing country.

Zifa crying out for credible leader