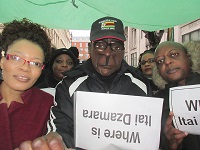 ZIMBABWE – With Dr Grace now openly described as a witchdoctor, it came as no surprise that Mugabe was magically transported to London to materialise at the Vigil to try to raise some of the $800,000 apparently wanted for his birthday bash with its 92 kg cake.

That the party is being held at the Zimbabwe Ruins is entirely appropriate. What may seem less appropriate to donors is spending so much feeding Mugabe at a time when Zimbabwe is appealing for $1.5 billion to help the starving.

The birthday boy – played by Fungayi Mabhunu in our Mugabe mask – turned up sleepily at the Vigil holding upside down one of our posters ‘Where is Itai Dzamara?’ He was presented with several cakes and a colourful birthday painting showing the name Mugabe drowning in a tide of blood. Pinned to the painting were Zimbabwean hundred trillion dollar notes worth two quadrillion, five hundred trillion Zimbabwe dollars. Surelyenough for anyone’s party.

Mugabe was fresh from making a televised address in Harare to appeal for an end to factionalism in Zanu PF following clashes in Harare between war veterans and riot police. Perhaps with Grace in mind, he spoke of the need ‘for a whip of discipline’ – perhaps to be applied by Vice President Mnangagwa who was with him for the address (along with 5 star nonentity Mphoko).

The clashes prompted war vet leader Mutsvangwa to make an extraordinary attack on Grace who he suggested was under the influence of occult powers. Perhaps this was one of the things Mugabe had in mind when he spoke of ‘contradictions’ in Zanu PF,

A more obvious contradiction came in an answer given by Agriculture Ministry Secretary Ringson Chitsiko when he was questioned about the food situation by the parliamentary committee on agriculture, which asked why Zambia had surplus maize when it was also affected by El Nino weather conditions. The difference, Chitsiko said, was due to ‘serious farming in Zambia at commercial level’. Who would have believed it?

The contradictions between the public and private faces of the ruling party have been shown in a new light by ousted Vice President Joice Mujuru in a lengthy interview with the UK Sunday Times. ‘I think this is pointing to the end’, said Mujuru.

‘He no longer has the energy to tell them to stop, and no one listens to him. He has no respect now – from anybody. It’s painful.’ According to Mujuru, Mugabe often falls asleep in cabinet meetings. ‘He would speak for 15 minutes then nod off and I would then chair the meeting, with everyone ignoring the fact he was asleep.’

Asked about Mugabe’s accusations that she had consulted witchdoctors about his death, she said: ‘I have never used magic. A head of state using his platform to lie and believing stories about frogs being kept in a calabash, and if one dies then he will die? I said to myself, “What a backward man.”’

Vigil supporter Philip Mahlahla, in an article in the Zimbabwean called on Mugabe to divert his birthday money to victims of the drought.

A well-attended meeting of the Zimbabwe Action Forum after the Vigil discussed the deteriorating situation at home and how we could prepare for the fall of Mugabe. Preparations were made for our latest protest on Friday outside a clinic in Nottingham run by a Zimbabwean immigrant doctor who has seized one of the last white-owned farms in Zimbabwe. We intend to invite Dr Nyatsuro to join us next Saturday when we present a petition to 10 Downing Street calling for him to be stripped of his British citizenship. For details see ‘Events and Notices’.

Thanks to those who arrived early to help set up: Benjamin Chigamba, Humphrey Dube, Fungayi Mabhunu, Philip Mahlahla, Julius Matera, Sharon Moyo, Eletha Mpofu, Esther Munyira and Jennipher Sabe. Thanks to Benjamin, Humphrey, Philip and Fungayi for putting up the tarpaulin in the rain. Thanks to Sharon, Roseline Mukucha and Cathrine Musa for looking after the front table.

ZIMBABWE - With Dr Grace now openly described as a witchdoctor, it came as no surprise that Mugabe was magically transported to London to materialise at the Vigil to try to raise some of the $800,000 apparently wanted for his birthday bash with its 92 kg c...
Share via
x
More Information
x