Notice: Trying to access array offset on value of type null in /var/www/vhosts/zimdaily.com/httpdocs/wp-content/plugins/corona-virus-covid-19-banner/includes/orchestrated-corona-virus-banner.php on line 255
 Inzamam agrees to coach Afghanistan on tour to Zimbabwe – Zimbabwe Daily Skip to content

Inzamam agrees to coach Afghanistan on tour to Zimbabwe 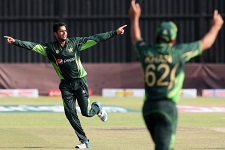 Calling Afghanistan “a fast rising team in international cricket,” Inzamam told The Associated Press that he will fly to Harare on Sunday to take charge of the ICC associate member.

“They have some good fighting cricketers and what I will be looking forward (to) is to better their batting technique in international matches,” said the 45-year-old Inzamam, who scored 8,830 runs in 120 test matches and 11,739 runs in 378 ODIs.

He retired from international cricket in 2007.

Inzamam is the third Pakistani cricketer to coach Afghanistan after Rashid Latif and Kabir Khan. Afghanistan has been looking for a new coach since Andy Moles’ contract expired in August.

Inzamam talked with Afghanistan cricket officials on Friday and said he turned down a longer contract.

“I don’t have experience of coaching an international team. That’s the reason I wanted to first see how it goes with Afghanistan.”

Inzamam agrees to coach Afghanistan on tour to Zimbabwe