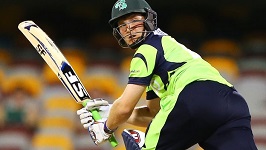 ZIMBABWE – A ninth-wicket partnership of 29 by Tim Murtagh and Andy McBrine helped Ireland edge a consolation win in the last game of their one-day series in Zimbabwe.

Sean Williams (51) and Sikandar Raza (50) hit half centuries but Murtagh’s four wickets helped bowl Zimbabwe out for 187 in 49.2 overs.

But the late partnership from Murtagh and McBrine ensured Ireland’s victory with 3.1 overs to spare.

The win keeps Ireland in 11th place in the ICC rankings – just ahead of Afghanistan, who start their series against Zimbabwe later this week.

Ireland started the three-match Harare series 10th in the world rankings but Zimbabwe’s two opening victories saw them move above their opponents.

Murtagh’s best one-day international bowling figures contributed to Zimbabwe collapsing from 159-4 to 187 all out.

Williams stroked eight boundaries in a fluent 51 before being dismissed by Paul Stirling while the dangerous Raza was bowled by Murtagh immediately after reaching his half century.

George Dockrell then produced two brilliant run outs in the space of six balls as the Zimbabwe innings imploded.

William Porterfield got the Irish run chase off to a fast start as 18 runs came off the first over before he was out for 20.

After Ed Joyce (7) went cheaply, Stirling’s knock helped take Ireland to 94-2 before Balbirnie (24) ran himself out for the second game in succession.

Stirling reached a cautious 50 from 92 balls but after the opener’s dismissal, Gary Wilson (19), Kevin O’Brien (10) and George Dockrell (13) all departed despite getting starts as Ireland slumped to 160-8.

However, Murtagh helped settle Ireland nerves with two boundaries in his unbeaten 19 and was supported by Donemana’s McBrine with an unbeaten 14.

ZIMBABWE - A ninth-wicket partnership of 29 by Tim Murtagh and Andy McBrine helped Ireland edge a consolation win in the last game of their one-day series in Zimbabwe. Sean Williams (51) and Sikandar Raza (50) hit half centuries but Murtagh's four wickets...
Share via
x
More Information
x