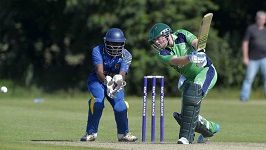 ZIMBABWE – Stuart Poynter’s century ensured it finished honours even after the second day’s play between Ireland and Zimbabwe A in Harare.

The Durham keeper-batsman gave himself the perfect 25th birthday present with his second century for Ireland – the other coming against Sri Lanka in Belfast last year.

Poynter struck 18 boundaries in his 125 from 166 deliveries, sharing a second wicket stand of 101 with Andrew Balbirnie (44).

Balbirnie had come to the crease following the dismissal of Paul Stirling (20) and found the boundary ropes six times in an entertaining innings – ended when harshly adjudged lbw off the bowling of M’Shangwe.

Poynter continued to impress, dominating a third wicket stand of 90 with Niall O’Brien (21) before both fell within the space of six balls with the total on 212.

Stuart Thompson (4) fell cheaply, but a sixth wicket partnership between Gary Wilson (47) and Kevin O’Brien (22*) looked to have given the Irish the upper hand before Wilson fell to the final ball of the day.

Earlier, John Mooney (4-74) and Craig Young (4-107) finished with four wickets apiece as Zimbabwe added 40 runs to their overnight 352 for 6 – Malcolm Waller the last wicket to fall for a magnificent 138.

Ireland resume day three exactly 100 runs adrift, but with batting strength in depth will be confident of parity.

ZIMBABWE - Stuart Poynter’s century ensured it finished honours even after the second day’s play between Ireland and Zimbabwe A in Harare. The Durham keeper-batsman gave himself the perfect 25th birthday present with his second century for Ireland - th...
Share via
x
More Information