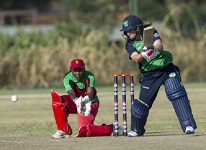 ZIMBABWE – IRELAND women bowled out Zimbabwe women for just 78 runs and raced to a seven-wicket win at Terdthai Cricket Ground in Bangkok, but both sides qualified for the ICC Women’s World Twenty20 Qualifier semi-final from Group B yesterday.

In the other Group B game at the Asian Institute of Technology Ground also in Bangkok, China women edged Netherlands women in a close contest to register their first win of the tournament.

After being put in, Zimbabwe got off to a decent start as their openers added 31. The script, however, changed quickly as left-arm pacer Isobel Joyce ran through the top order to leave Zimbabwe struggling at 64 for 5 by the 16th over. Isobel ended with 4 for 20 from her four overs and the other bowlers also chipped in to skittle out Zimbabwe in 19 overs. Only three batters got to double-digit scores; the highest of them being 15 by Modester Mupachikwa, the opener.

Clare Shillington (22 in 26 balls) and Cecelia Joyce (36 in 37 balls) then put up 48 for the opening wicket to make light work of the chase. Zimbabwe struck to get three quick wickets, but it was too late as Ireland strolled to a win with 22 balls to spare.

Elsewhere, Netherlands opted to bat, but struggled to get going. Miranda Veringmeier (26 in 25 balls) and Cher van Slobbe (25 in 48 balls) were among the runs, but the rest of the batters failed to make a significant contribution. Netherlands posted 101 for 6 in 20 overs, with Li Yingying, Liu Jie and Fengfeng Song all picking up a wicket each.

In their chase, China got off to a poor start, reduced to 6 for 3, with Heather Siegers dismissing the openers. However, it was then that Huang Zhuo came to the forefront. She scored an assured 54-ball unbeaten 40, putting on a 47-run partnership with Song for the fourth wicket; 29 with Wu Juan for the fifth and an unbroken 21 for the sixth with Chai Yudian to take China through in 18.4 overs with five wickets in hand.

At the end of the group-stage games, the Group B table was headed by Ireland with six points, followed by Zimbabwe with four and China with two, with Netherlands bringing up the rear.

After the earlier matches on the day, Bangladesh women and Scotland women qualified for the semi-finals from Group A. – ICC

Video: Abdur Razzaq scores an attacking half-century against Zimbabwe in 2013

ZIMBABWE - IRELAND women bowled out Zimbabwe women for just 78 runs and raced to a seven-wicket win at Terdthai Cricket Ground in Bangkok, but both sides qualified for the ICC Women’s World Twenty20 Qualifier semi-final from Group B yesterday. In the oth...
Share via
x
More Information
x