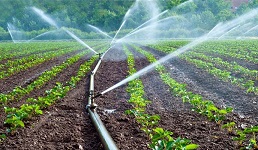 ZIMBABWE – Tagara Dzapasi, a communal farmer, looks wistfully at the cloudless sky, hoping for just even a little sign of cloud formation.

Guruve falls under natural Region 3, with annual average rainfall of between 500mm and 700mm, but has seen grain yields declining over the past decade due to crop failure.

According to agricultural experts, Region 3 is one of the two major food producing regions in Zimbabwe, together with Region 2, which receives the highest rainfall, is mostly suitable for forestry, fruit and intensive livestock production.

To Dzapasi, erratic rains in his area are a sure sign that the gods have forgotten the once verdant but increasingly desolate land. But he also accepts blame for humankind’s failure to harvest water for the parched land.

“Things have changed in this area. It seems like our ancestors have abandoned us. Nothing is going right. It’s either the rains are excessive and kill our crops or there is little rain. The result is the same,” he said with resignation.

“We need to be able to use our water resources or irrigation but we do not have the capacity due to lack of funds and most of the irrigation equipment that was on this farm and other farms has been stolen and totally vandalised.”

The drought problem, which experts have attributed to climate change, has also hit several other parts of the country.

Zimbabwe is currently experiencing one of its worst droughts in recent memories, with experts predicting the El Niño-induced dry spell and attendant hot temperatures could produce worse conditions than those witnessed during the 1992 drought.

According to official statistics, Zimbabwe has 11 000 dams, which could potentially irrigate 11 million hectares of land.

However, the vandalism and theft of irrigation equipment, mostly during the chaotic land redistribution programme in the early 2000s has severely undermined the country’s irrigation capacity.

Organised, large-scale irrigation has a long history in Zimbabwe, taking off around 1952, as the then Rhodesian government responded to the 1947 drought. By independence, Zimbabwe had 200 000 hectares (about 3% of the country’s total arable land) under irrigation. The hectarage went down to around 120 000 hectares following the disruptive land redistribution mainly due to theft and vandalism as well as new farmers’ inability to maintain the infrastructure.

The country has failed to fully utilise its many dams for irrigation purposes at a national level to minimise the effects of droughts and erratic rains.

Government has also struggled to complete major dam construction projects, such as Gwayi-Shangani, Kunzvi and Tokwe-Mukosi due to limited financial resources. It has, however, managed to secure irrigation equipment under a $98 million loan signed with Brazil as part of its efforts to revive obsolete irrigation schemes across the country.

While irrigation would go a long way in securing Zimbabwe’s food security, it requires energy, which Zimbabwe is also grappling with. Diesel-powered irrigation schemes mean significant cash investment in procuring the fuel, while electricity-driven schemes run up significant bills.

“As much as we need to irrigate, electricity in Zimbabwe is a problem, expensive and rare. I suggest the solar initiative but the bottom line is farmers do not have money, the sector is not performing,” said Zimbabwe Commercial Farmers’ Union president Wonder Chabikwa.

“Irrigation is the way to go for Zimbabwe, but there is need for government to ensure the restoration of institutions that cater for farmers. We need affordable loans at low interest rates. Institutions like Agribank should go back to what they used to do in terms of loans for farmers. Irrigation equipment is very expensive and with current levels of performance of the agricultural sector in the country, it is impossible for farmers to go back on the land again after acquiring it.”

Power utility Zesa Holdings (Zesa) says it is owed $80 million by farmers, most of it for irrigated crops such as wheat and tobacco. Farmers are also pushing back against Zesa’s plans to install pre-paid meters on farms, arguing this move would kill production as they can only pay for electricity at the end of the season, when they sell their produce.

Agriculture Mechanisation and Irrigation Deputy Minister Davis Marapira said government had embarked on a drive to ensure that Zimbabwe utilises its considerable water sources, but he bemoaned the low-levels of long-term funding for agriculture.

“The drought problem will be solved by using both underground water and surface water. Each A1 and A2 farmer should have one or more boreholes at his or her farm. Water harnessing and conservation should be the order of the day. New technologies like centre pivots and drip irrigation should be used,” Marapira said.

“Irrigation development is the best way to utilise water in most of our dams. The reason for failing to finish harnessing and utilisation water in our dams is lack of adequate funding from our treasury. Zimbabwe needs long term funding to finish existing dams as well as construction of new dams.”

Marapira said a lot of money is being used for the rehabilitation of the country’s irrigation schemes. New schemes are also being developed mostly by private players such as the Brazilian programme and the Swiss Development Corporation which is resuscitating a lot of irrigation schemes in Masvingo province, but it will take a while for all schemes to start working properly.

“Agriculture in Zimbabwe is not doing well because of short-term finance. Long-term and medium-term projects are both financed by short-term funds, resulting in 80% of our farmers failing to focus on productivity, but loan repayments. Half of them end up failing to pay. Agribank should be capitalised enough to cater for all this,” he said.

Zimbabwe also continues to register declining yields for its staple maize grain, due to a combination of poor quality inputs and inadequate rains. Yields now average 800kg per hectare for non-irrigated crops, down from an average of 3,5 tonnes per hectare towards the end of the last century.

Irrigation could play a major role in boosting crop yields. For example, the Wenimbi irrigation scheme in Mashonaland East used to produce 7 tonnes of maize per hectare. Given the country’s established irrigation hectarage of about 200 000, this means the country can at least guarantee 1,4 million tonnes of maize if all that land is put under irrigated maize. This would go a long way in solving Zimbabwe’s food security nightmare, considering that the country consumes 1,8 million tonnes of grain annually.

Man arrested for allegedly having sexual intercourse with 15 years old

Irrigation — The ideal solution to droughts

ZIMBABWE - Tagara Dzapasi, a communal farmer, looks wistfully at the cloudless sky, hoping for just even a little sign of cloud formation. Guruve falls under natural Region 3, with annual average rainfall of between 500mm and 700mm, but has seen grain yiel...
Share via
x
More Information
x