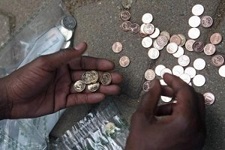 ZIMBABWE – The implications were huge, if they did so and forced the banks to take them in as legitimate currency, they would bankrupt the banks overnight, cash withdrawals would do the rest. It is unlikely that anyone would accept the “Bond Notes” and they would almost certainly be rejected by the recipients.

I contacted the Minister of Finance, for whom I have a lot of respect and he replied that there was no truth in the matter. I circulated this response and went to bed a bit more at ease. In my view, had they attempted anything along these lines, given the experience of all Zimbabweans from the era of Gono and the “Bearer Cheques”, we would have seen an immediate collapse of the State. The regime would have been forced to enter into talks to form a national government and it is most likely that Mr. Mugabe, the author of the mess, would be forced into retirement in disgrace.

While there might not have been any substance to the rumor, it does reveal how fragile the situation is in Zimbabwe right now. They delayed payment of pensions by a month in November, have not paid any bonuses even though they were assured by Mr. Mugabe that they would be paid and civil service salaries will be delayed this month for the first time. Bonus payments will be carried over – and probably December pensions, into 2016.

During the GNU, the MDC demanded a full professional audit of the Civil Service, convinced that it was loaded with political appointees and ghost workers. Zanu PF resisted but eventually conceded and allowed a partial audit – but excluded the Armed Forces, the Police and the Secret Service. We found perhaps 10 per cent of the regular Civil Service were people without real jobs, political appointees or simply ghost workers who did not exist. Even so nothing was ever done to down size.

Now, panicked by the shrinking resource base and revenues, the State has ordered a full audit of the entire Civil Service including the sensitive areas excluded from scrutiny in the GNU era. Even so savings are only expected to be about $176 million a year – less than 5 per cent of the budget. But the real issue is how much longer can they carry on pretending that all is in order?

They clearly cannot even contemplate a return to the local currency; they are stuck with the US dollar for all official functions. They cannot print money although they are issuing billions of dollars in Treasury Bills denominated in USD and carrying a small interest rate (2 to 6 per cent per annum). This is a form of printing money and it is only a matter of time before this window will also close and will be unacceptable as a means of settling State obligations.

By my calculations the Government has built up a domestic debt of over $6 billion in the short time it has been in power following the GNU. This is completely unsustainable and much of the debt has been incurred without proper authority or accountability. They are projecting revenues of $3,8 billion in 2016. My own view is that they will be lucky to collect $3,2 billion. This is less than the total cost of salaries and pensions and allows no space for any other functions of the State. To meet these they will have to continue to try and raise money with Treasury Bills.

Time is running out on this regime. In March 2016 they are expected to meet certain deadlines by the Multilateral Agencies in order to stay on course with the reengagement process and obtaining debt relief from the Paris Club and others. These deadlines are both economic and political. Failure would negate all the work that has been done, first by the GNU Government and then later by the Ministry of Finance to try and restore our standing in global markets. There can be no recovery in our economy until we are back in the global community of States.

With Mr. Mugabe at the helm there is little hope of us achieving these immediate goals. He is refusing to change any of his disastrous policies that have got us into this mess and he is dismantling the whole system that has protected his regime for 35 years. I spoke to a family on the outskirts of Bulawayo this week and the one daughter said “Zanu PF will shortly consist of Mr. and Mrs. Mugabe chete” (alone). A bit of an exaggeration – but not much. He has rejected any talk of succession and in so doing he has committed the country to potential conflict when finally he meets his maker. He is 93 years old and looks every year of that age when viewed close up. He may think he is capable of carrying on and that he will live forever, but the rest of the country knows otherwise.

It was confirmed this week how serious the situation in South Africa is with the drought that has gripped that country this year. The President of the National Farmers Union stated the other evening that only 20 per cent of normal cropping land has been planted. It is now too late to recover any of that potential and therefore we are now looking at a basic food shortfall in SA of nearly 10 million tonnes of maize grain.

Here in Matabeleland we are in a similar situation with only two years in the past century having seen such dry conditions up to the end of December. The veld here is dry and brown, all water sources are taking strain and livestock continues to die in large numbers across the region. The wild life is also taking a huge toll from the hot dry conditions especially in the areas populated by numbers of Elephant.

In SA they cannot be far from the declaration of a National State of Emergency to deal with the food and water situation. Here we are perpetually in that state and there is no reason for such a declaration except as a means of trying to mobilize international assistance. We banned sugar imports because we had a sugar surplus. The sugar workers have gone on strike to demand double the pay they are getting (already as farm workers they are getting much higher salaries than the rest of the region). So now, at Christmas time we have no sugar in the shops.

We put large tariffs on beer, to protect a local monopoly in the hands of the Delta Corporation – only to discover that they cannot meet demand. The blundering in policy matters continues unabated with the Old Man of the seas asleep at the helm. After 35 years in power you would have thought that they might have learned a little about how to govern a country. But they have been so busy trying to manipulate our democracy and to concentrate control and wealth in the hands of a few that the basic lessons seem to have been lost in the mayhem.

Now it’s time for payback and for me at least, I think the end of the Mugabe era has begun, as Churchill said about the end of the Second World War, this may not be the end, but it certainly is the beginning of the end.

ZIMBABWE - The implications were huge, if they did so and forced the banks to take them in as legitimate currency, they would bankrupt the banks overnight, cash withdrawals would do the rest. It is unlikely that anyone would accept the “Bond Notes” and...
Share via
x
More Information