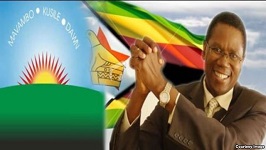 ZIMBABWE – WASHINGTON – The leader of Zimbabwe’s opposition party Mavambo Kusile Dawn, Simba Makoni, says he is shocked by the level of infighting in Zanu-PF as the battle to succeed President Robert Mugabe intensifes.

In an exclusive interview with VOA, Makoni a former finance minister and member of Mr. Mugabe’s ruling Zanu-PF party, said when he left the party factionalism was rife but he did not expect it to go a gear up.

He said, “I am surprised because I didn’t expect it would go this far or they (Zanu-PF members) would sink this low. The levels they are displaying now, exhibited by what Grace (First Lady Grace Mugabe) is doing, what young (Patrick) Zhuwawo (Mr. Mugabe’s nephew and Indigenization Minister) is thinking he is doing there is no center there any more let alone a center that’s holding so it’s a free for all.

“When you see and hear the kind of things they are saying to and about each other on Twitter and Facebook and sometimes on rallies you do not believe they are people of one family, that they have anything in common, they don’t.”

Political analysts allege that failure by Mr. Mugabe and Zanu-PF to manage the long-ruling and ageing leader’s succession has brought changing complexities in the power battles that appear to have no end or solution in sight.

Mr. Mugabe at 91 is the world’s oldest president.

The G40 is allegedly engaged in close combat with another faction led by Vice President Emmerson Mnangagwa. All the mentioned party members have shot down suggestions that they are engaged in factionalism. But this has not stopped them from openly sniping at each other. The two warring camps had engaged in a marriage of convenience to oust former Vice President Joyce Mujuru and her allies.

Makoni accused President Mugabe of turning a blind eye to the country’s problems and focusing on maintaining power even as his lieutenants have intensified their factional fights.

And Makoni said, “In Zimbabwe it is the politics gone stupid. The politics has gone stupid because (President) Robert Mugabe is committed to keeping his power at any cost and by any means. And any costs mean no jobs, company closures, food deficits. It means fear, it means violence, and it means intimidation.  As long as he is sitting in the throne, he couldn’t care less.”

In its  report titled ‘Zimbabwe: Waiting for the Future’, the ICG said Zimbabwe’s politics and economy are precarious, raising the need for Zanu-PF to address President Mugabe’s successor at the party’s elective December congress.

The World Bank, in its latest report paints a gloomy picture of Zimbabwe’s economic situation. The Bretton Woods institution says the economy is expected to grow by only one percent this year, on the back of a sustained liquidity crunch and under performance in all sectors.

WHO IS Simba Makoni?

Simbarashe Herbert Stanley Makoni was born on Mar 22, 1950. In 1980 he was appointed Deputy Minister of Agriculture at Zimbabwe’s independence, when he was 30 years old.

In 1983, Makoni was elected as the Executive Secretary of the Southern African Development Community, serving in that post for 10 years.  Makoni returned to the Cabinet as Minister of Finance on 15 July 2000 until 2002.

ZIMBABWE - WASHINGTON - The leader of Zimbabwe’s opposition party Mavambo Kusile Dawn, Simba Makoni, says he is shocked by the level of infighting in Zanu-PF as the battle to succeed President Robert Mugabe intensifes. In an exclusive interview with VO...
Share via
x
More Information
x