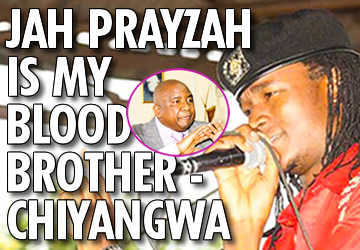 Chiyangwa said this at Suluman Chimbetu’s 32nd birthday party held at Harare’s Book Café on Tuesday night. He said he had deliberately kept his relationship with Jah Prayzah under wraps.

“We did not want to publicise it because then people would start talking a lot and spoil the young musician’s rise.

Jah Prayzah said he was humbled to be among the guests and thanked music promoters such as Chipaz who has nurtured him.

“I am happy mukoma Chipaz is here. These are promoters who have stood with us through the difficult times,” he said.

“Tonight, I will, therefore, like I always do when I arrive, give you (Sulu) a stand (residential),” pledged Chiyangwa.

The businessman traced his humble beginnings to the days he used to stay with his late brother Mr Bulk in Chitungwiza.

“I used to stay with my brother Bulk before I moved to my own cubicle known then as chiZvobgo. It was just a room,” the Native Investments Africa Group founder said.

He said he shrugged off poverty through innovative means.

“We were doing everything that could give us money,” he said.

“And then I ventured into music promotions and boxing among other errands. That was not an easy job because in promotions you win or lose.”

There was loud applause from the audience when Macheso was introduced.

Apparently, it was because Suluman had recently been in the news supporting Macheso through his rancourous maintenance case with estranged second wife Tafadzwa.

Clad in a red jacket, Macheso’s smile warmed up the evening.

“I am here as a father, I used to work with Sulu’s father, Simon,” Macheso said doing his trademark salute.

“I am happy to continue working with the Denderas and wish Sulu more fruitful years.”

Sulu’s wife said she was blessed to have such a loving husband. “He enjoys hairdressing and cooks very well,” she said.

They were later joined onto the stage for the one big party song by popular dancers Beverly Sibanda and Majuice, singers Jah Prayzah and Somandla Ndebele.

Macheso had audiences on their feet as he teasingly introduced a dancehall tune which sent revellers in frenzy.