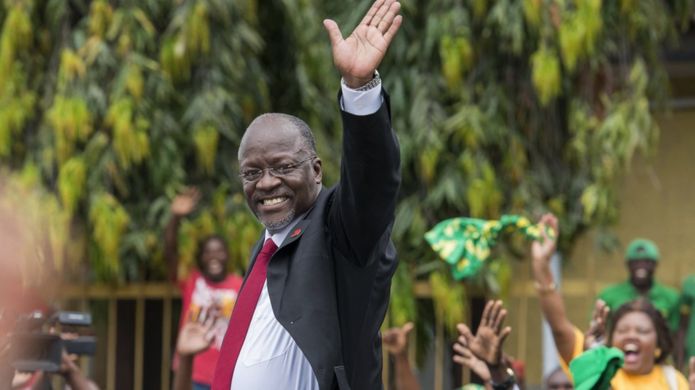 John Pombe Magufuli, the son of a peasant farmer who became Tanzania’s president in 2015, has died aged 61. Once praised for his no-nonsense approach, he went on to become a controversial leader, especially over his response to the coronavirus pandemic.

He was elected for a second term in 2020 amid opposition accusations of fraud and intimidation.

Before he was president he acquired the nickname “the bulldozer” for driving a programme to build roads as minister for works, and later was hailed for his anti-corruption stance and his distinct dislike for wasting money.

As president he was also accused of cracking down on dissent and curtailing certain freedoms, but following his death reflections on his time in power will be dominated by his idiosyncratic handling of Covid-19.

‘Coronavirus is the devil’
When Covid-19 arrived in Tanzania, President Magufuli did not believe in people staying at home. He wanted them to get into the churches and mosques to pray.

“Coronavirus, which is a devil, cannot survive in the body of Christ… It will burn instantly,” Magufuli, a devout Christian, pronounced from the altar of a church in the capital, Dodoma.

Since June 2020, when he declared the country “Covid-19 free”, the president, along with other top government officials, mocked the efficacy of masks, doubted if testing worked, and teased neighbouring countries which imposed health measures to curb the virus.

There was little testing and no plans were made for a vaccination programme, leaving the country as an outlier.

But when he was sworn in as president in October 2015, Magufuli seemed to be the sort of person Tanzania needed – an efficient, incorruptible leader.

‘Bulldozer’ gets to work
His results-oriented actions were also framed as applicable to other African countries – a dose of what the continent needed to deal with its governance issues.

On the very first day of his presidency, he sent a stark message that he would not tolerate the country’s chronic absenteeism in its civil service, when he visited the finance ministry offices, asking for the whereabouts of those not at work.

He also purged thousands of so-called “ghost workers” – essentially non-existent employees – from the public payroll, and fired officials considered corrupt or under-performing, in public. Sometimes this was even done live on television.

And he clamped down on what he saw as extravagant spending, cancelling Independence Day celebrations for the first time in 54 years. Instead, he ordered a public clean-up, getting his own hands dirty by picking up rubbish outside State House.

He also banned all foreign trips for public servants.

In the first year of Magufuli’s presidency, this approach earned him a great deal of praise, inspiring the Twitter hashtag: #WhatWouldMagufuliDo.

While some posts mocked the president’s austere policies – for example: “Was about to buy myself an oven then I asked myself #WhatWouldMagufuliDo” with a photo of a saucepan suspended over candles – others called for more African leaders to emulate his leadership style.

In 2017, a Kenyan professor went so far as to call for the “Magufulication” of Africa during an address at the University of Dar es Salaam.

But from the outset, it was also clear there was a darker side to his leadership – that a number of his initiatives would slowly chip away at the country’s democratic space.

In January 2016, barely two months into his term, his administration announced that state TV would no longer broadcast live parliamentary proceedings, officially as a cost-cutting measure.

The opposition saw this as censorship as it was among the few ways it could hold the government to account. It planned demonstrations against the ban, but the government responded by banning all protests.

Another example of such censorship was Magufuli’s response to a 2017 song by popular Tanzanian rapper Nay wa Mitego. Less than a day after its release, Mitego found himself in police custody.

He was accused of insulting the president and maligning the government for his song which included the prescient lyrics:

“Is there still freedom of expression in this country?” the raspy-voiced artist, whose real name is Emmanuel Elibariki, had rapped.

“What if I speak and later find myself at Central [Police Station]?”

“Are there leaders who make stupid decisions? There are!”

The fear he sang about had come true – he was indeed detained at the Central Police Station in Dar es Salaam.

Although President Magufuli ordered Nay wa Mitego’s release just a day later, he advised that the song should be reworked to include lyrics about other problems in the society, such as tax cheats.

In 2017, opposition MP Tundu Lissu, who three years later ran against Magufuli for the presidency, was shot and seriously injured outside his home.

Mr Lissu accused the state of trying to kill him and he was charged with hate speech for calling the president a dictator. The government denied any involvement in the attack.

In what was seen by human rights groups as curbing press freedom, the president’s administration suspended newspapers.

In 2017, Acacia Mining, a subsidiary of Canadian parent company Barrick Gold, was slapped with an incredible $190bn (£145bn) tax bill over royalties the government said it owed, though it denied any wrongdoing.

As part of the settlement, Barrick eventually agreed to pay $300m after buying out Acacia, and a new operating company, Twiga Minerals, was formed with the government owning 16% of the joint venture. Barrick and the Tanzanian government also agreed to the sharing of unspecified future economic benefits from the mines on a 50-50 basis.

Then there was his highly contentious scuppering of an attempt to overturn the stipulation that pregnant schoolgirls be expelled.

And in 2018, Tanzania passed a law to punish anyone questioning official statistics, making the state the sole custodian of data. The World Bank said the changes were “deeply worrying”.

But even his critics agree that Magufuli contributed to Tanzania’s development, investing in several large infrastructure projects such as the creation of a standard gauge railway to connect the country with its regional neighbours, the expansion of major highways, and the construction of a bus rapid transit system in the commercial hub of Dar es Salaam.

He also increased electricity production to the grid which reduced the need for power rationing.

And he revived the state-run national airline, Air Tanzania.

He styled his governance after Tanzania’s first president, Mwalimu Julius Nyerere, who was always fiercely independent. And this appeared to inform his approach to coronavirus.

“Our founding father was not someone to be directed to be told what to do… Those who devise these kinds of rules [lockdown] are used to making these directives that our founding father refused,” Magufuli said, referring to Nyerere’s habit of rejecting advice coming from Western nations, who the committed socialist distrusted.

‘I know what it means to be poor’
Magufuli grew up under Nyerere’s rule in a village in north-western Chato district along the shore of Lake Victoria, and says his modest background has inspired his own desire to work for the Tanzanian public.

“Our home was grass thatched, and like many boys I was assigned to herd cattle, as well as selling milk and fish to support my family,” he said during his 2015 campaign.

“I know what it means to be poor. I will strive to help improve people’s welfare,” he added.

After school he worked for a year as a senior school maths and chemistry teacher before returning to further education. He worked for a few years as an industrial chemist before resigning in 1995 to run for the parliamentary seat in his own Chato constituency.

After taking that seat, he quickly rose through the ranks to be appointed deputy minister for public works.

The department’s senior minister, Mama Anna Abdallah, says his no-nonsense style, focused on efficiency and results, was quickly evident. In his first year in the job he succeeded in steamrolling through the building of a long-delayed road.

By 2015, Magufuli wanted to run for the presidency. He is said to have been considered a consensus candidate for the Chama Cha Mapinduzi (CCM) party – which had been in power for 54 years.

The elections were the tightest in the country’s history, but Magufuli pulled ahead to win with 58% of the vote.

He won his second term with 84% of the vote, but the main opposition parties denounced the result as fraudulent.

Calls for other regional leaders to emulate Magufuli’s style diminished as he faced criticism from political opponents, civil society and Western countries, who said he was oppressing the opposition, curtailing press freedom and holding foreign companies to ransom.

But as a president who often styled himself as an African nationalist and devout Catholic waging war against foreign powers seeking to exploit the East African nation, he was not perturbed by such censure.

This may have steered his attitude towards dealing with the pandemic, an attitude that will forever colour the way Magufuli will be viewed. – BBC News

Govt Should Focus On Fighting Covid-19 Instead Of Silencing Critics: Chin’ono

John Pombe Magufuli, the son of a peasant farmer who became Tanzania's president in 2015, has died aged 61. Once praised for his no-nonsense approach, he went on to become a controversial leader, especially over his response to the coronavirus pandemic. H...
Share via
x
More Information
x