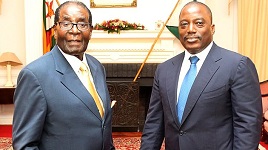 ZIMBABWE – Democratic Republic of Congo President Joseph Kabila, arrived in Harare yesterday to hold talks with African Union chairperson, President Mugabe and discussed a wide range of issues that will cement the economic and political relations between the two countries.

President Mugabe is the chairperson of the AU while President Kabila is the first vice chair with Nigeria being the second vice chair.

He then proceeded to State House where he held a closed door meeting with President Mugabe.

Speaking after the meeting, President Mugabe said his DRC counterpart had updated him on the political situation in his country.

“My brother here paid us a visit. He has been away from us for a long time but very busy in his own country which is much larger than ours,” President Mugabe said.

“He gave an account of how they are organising themselves geographically and politically in order to unite the people and they feel they are getting there.

“They are also, just now, trying to prepare for local elections ,which will lead to national ones.”
President Mugabe said they had also deliberated on economic issues.

“We talked about the economy as well and you know they are very rich in resources but like ours, they are underground,” he said.

“They have diamonds, cooper gold and they have what we don’t have, oil. They possess them.

“Once upon a time a country called Belgium pretended to be master of what they call the Congo but they have been dismissed and people are free.”

President Kabila, who leaves Zimbabwe today, said he was happy to be “home” in Zimbabwe.
“I came back home after quite some time,” he said.

“We talked about the region and the Congo but especially relations between these two countries, Zimbabwe and DRC relations that we need to continue to reinforce and consolidate in all spheres that is economic, political and defence.”

He added: “Our political process is an ongoing one which will definitely culminate in dialogue and then elections later on. We are steadfast and I have invited the President to come to Kinshasa one of these days just as I am going to come back soon.”

Earlier on Mr Barnabe Kikaya-Karubi, who is the chief diplomatic adviser to President Kabila, had told journalists that the meeting between the two Presidents would subsequently see Government officials between the two countries meeting regularly.

“For the time being their meetings are happening at ministerial level and it has been dragging and we last met in 2013,” he said.

“We are hoping that now that it has been elevated to the Presidential level, these meetings will have more substances and will be held on a more regular basis.”

He said President Kabila would soon call for a national dialogue involving all political players.
“We are going to have a political dialogue back home,” Mr Karubi said.

“It has not been announced yet but it is going to be soon.
—
“All politicians in Congo will have to meet around the table and discuss the future about our country

“Our country is very young and we have had two elections and next year we are supposed to have the third one. There are many issues that we have to face before we go for these national elections.

“National dialogue is necessary before thinking about anything else.”

DRC ambassador to Zimbabwe, Mr Mwanampanga Mwana Nanga, said President Kabila had addressed most of the challenges in the country, particularly those to do with rebels.

Mugabe – ‘If Only We Could Live Forever’