JSC beefs up staff to deal with graft cases 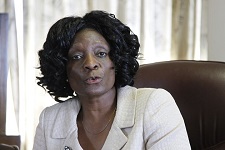 ZIMBABWE – Judicial Service Commission secretary Justice Rita Makarau says the commission has been overwhelmed by corruption complaints since the recent launch of the “Against Corruption Together” campaign and an additional deputy secretary has been appointed to deal with such issues.

JSC only had one deputy secretary, Mr Walter Chikwana, but due to the mounting pressure, Mr Munamato Mutevedzi has been elevated from the position of chief registrar of superior courts to acting deputy secretary responsible for legal matters.

Mr Mutevedzi, a lawyer and veteran magistrate, who has successfully served as chief registrar of the superior courts, will now deal with the corruption complaints among other legal issues within the JSC.

Justice Makarau said the public was overwhelmingly responding to the corruption campaign and many complaints have since been received.

“We have received an avalanche of complaints, some of which are old cases while others are fresh ones.

“In view of the numerous corruption complaints we are now receiving from the public, we realised the need to have an additional deputy secretary to deal with legal matters. Mr Mutevedzi is now my second deputy,” said Justice Makarau.

Police chief spokesperson Senior Assistant Commissioner Charity Charamba yesterday also confirmed that the Against Corruption Together campaign was beginning to pay dividends as complaints were being received since the launch of the campaign on February 5 this year.

“Complaints are coming up, in fact many of them. Some will be reporting corrupt activities they have seen happening while others will be complaining against the way they have been treated by the police.

“The Against Corruption Campaign was a good thing and it aided to the work that we have already embarked on as police,” she said.

Zimbabwe early this month stepped up the fight against corruption, with stakeholders in the justice delivery system launching an anti-corruption green card that was distributed to the public to promote the culture of whistle-blowing.

The card is inscribed “O % NO CORRUPTION” and has contact numbers of eight stakeholders, namely Attorney-General’s Office, Judicial Service Commission, Law Society of Zimbabwe and Ministry of Justice, Legal and Parliamentary Affairs.

If asked for a bribe, a member of the public will flash the card in the perpetrator’s face before calling the numbers provided.

Mr Mutevedzi was sworn in as magistrate in 1999 and served a resident magistrate for Chitungwiza, provincial magistrate in charge of Harare, deputy chief magistrate before being appointed acting chief registrar of the superior courts.

Justice Makarau said Mr Sithembinkosi Msipa, a lawyer and former registrar of the High Court, has been elevated as acting chief registrar of the superior courts to fill in the vacancy created by Mr Mutevedzi’s promotion.

Mr Msipa is also a seasoned magistrate who was sworn in to the bench 19 years ago and he headed many stations prior to his appointment to the High Court in 2013.

He was once provincial magistrate in charge of Gweru, resident magistrate at Western Commonage Courts in Bulawayo, Victoria Falls court and Tsholotsho court.

Mrs Faith Mushure, an experienced magistrate and a lawyer, has been promoted from being the registrar of the Labour Court to replace Mr Msipa at the High Court as acting registrar.

JSC beefs up staff to deal with graft cases

ZIMBABWE - Judicial Service Commission secretary Justice Rita Makarau says the commission has been overwhelmed by corruption complaints since the recent launch of the “Against Corruption Together” campaign and an additional deputy secretary has been ap...
Share via
x
More Information