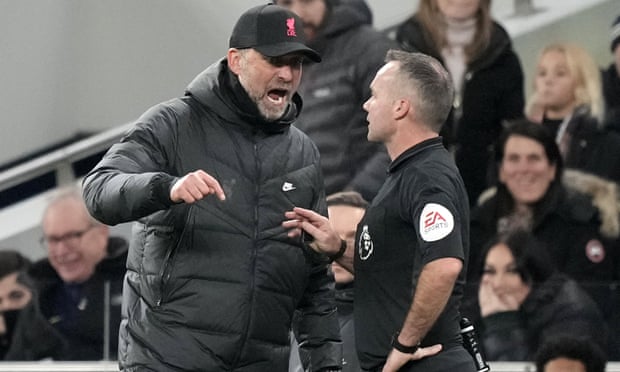 ENGLAND – Jürgen Klopp said Harry Kane should have been dismissed for a foul that could have broken Andy Robertson’s leg and Liverpool should later have been awarded a penalty as he seethed at referee Paul Tierney’s handling of a thrilling 2-2 draw at Tottenham.

The Liverpool manager confronted Tierney on the pitch after the game and was caught on camera shouting: “I have no problems with any referees, only you. You have never played football.” Klopp’s anger centred on Tierney’s decision to only book Kane for a dangerous tackle on Robertson and the refusal of VAR official Chris Kavanagh to consider a possible red card offence.

The Liverpool left-back was later sent off himself when his yellow card was upgraded to red after VAR advised Tierney to check Robertson’s wild foul on Emerson Royal on the pitch-side monitor. The referee’s refusal to award a penalty when Emerson barged into Diogo Jota was another sore point.

“The result was fine but the game would have been completely different with two decisions in the first half,” said Klopp, whose side now trail Manchester City by three points after their 4-0 win over Newcastle. “Let’s start with Robbo. We saw it back and yes you can give a red card there. It’s not the harshest ever but not the smartest as well and he knows that. He lost it a little bit.

“This red card you can give but this was proof that VAR was there today because before that we thought he might not be in his office. I think we all agree that Harry Kane should have seen a red card, and he didn’t.

“The penalty situation: Mr Tierney told me he thought Diogo Jota stopped on purpose, he wanted to get hit. That’s a very exclusive view. It’s really difficult to do these things that quick. It was a very quick decision from him. It’s a clear penalty but he thought it’s clearly not a penalty – wow. That’s obviously two wrong decisions from him, one right, and all three against us.”

On Tierney, Klopp added: “What is his problem with me?” However he skirted over the possibility that Kane’s status as England captain afforded him leniency from match officials.

“I have no idea. You have to ask VAR,” he said. “It’s a clear, absolutely 100% red card. If Andy Robertson’s foot is on the ground his leg is broken. Luckily for both it was in the air, but it’s still a red card. The ref saw it different.”

Tottenham head coach Antonio Conte, by contrast, insisted it was wrong to berate the referee following an absorbing contest, although questioned the decision to allow Liverpool’s second goal after a handball in the buildup by Mohamed Salah.

Conte said: “I haven’t seen the Robertson situation or the Harry Kane situation or the possibility of a penalty [for Dele Alli]. My staff said it was incredible that the second goal was not disallowed because it was a clear handball by Salah. The game was very exciting with great emotion and I don’t think it’s good for anyone to speak about the referee after a game like that.

“I said this to my players: on the one hand we had a good performance against one of the best teams in the world, not only in Europe. On the other hand, when you create many, many chances you have to kill your opponent to get three points. For this reason we have to be a bit disappointed.

ENGLAND - Jürgen Klopp said Harry Kane should have been dismissed for a foul that could have broken Andy Robertson’s leg and Liverpool should later have been awarded a penalty as he seethed at referee Paul Tierney’s handling of a thrilling 2-2 draw at...
Share via
x
More Information